The project was conceived in the social innovation field with a particular focus on sustainability. After conducting two parallel researches about wellbeing trends and users’ perception of digital services, we compared the results and a contrast emerged. On one hand, a smart futuristic city where technology and IoT are everywhere, while on the other side people who do not have sufficient tech skills to access their city services. So a question arose: in a digital city, what happens to those who are not digitally proficient? Making every city service digital while assuming that everybody is able to use technology cuts out all those who do not know how to use digital services and devices. As a consequence, in a future where everything is digital, these people could be deprived of the possibility of exercising their citizenship rights. This problem led to the following question: how might we provide people who lack tech skills with the possibility to use digital city services? 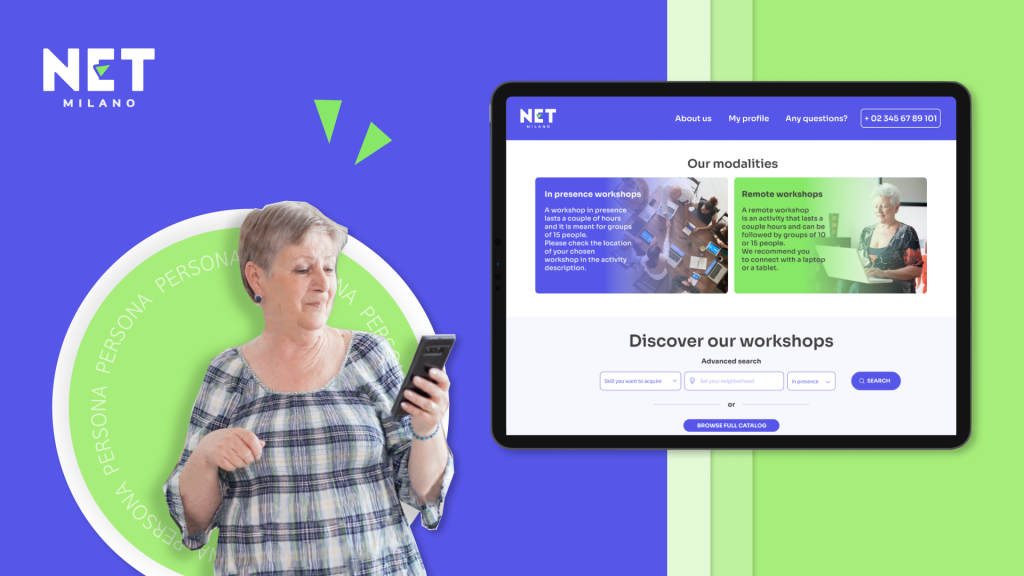 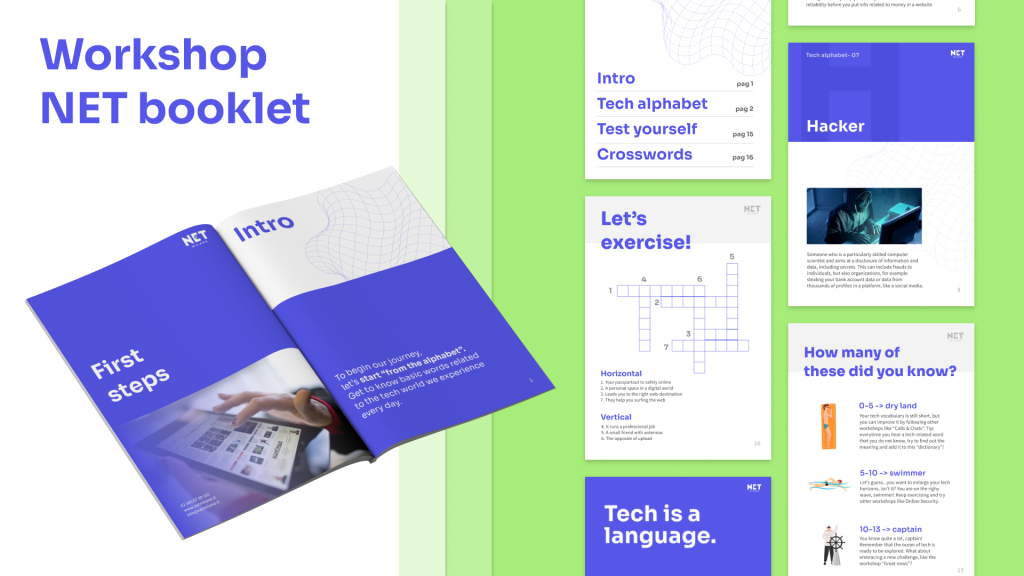 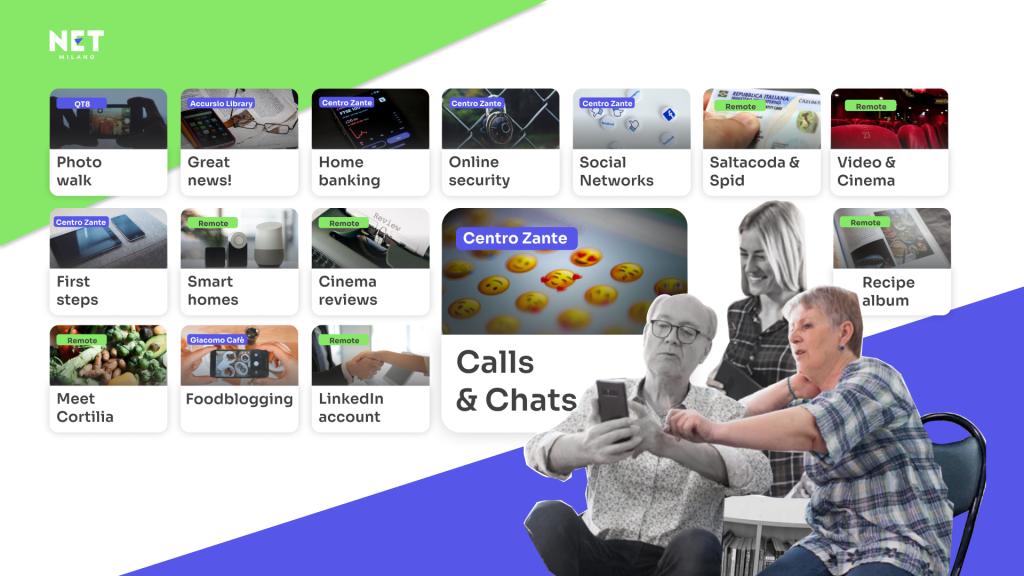 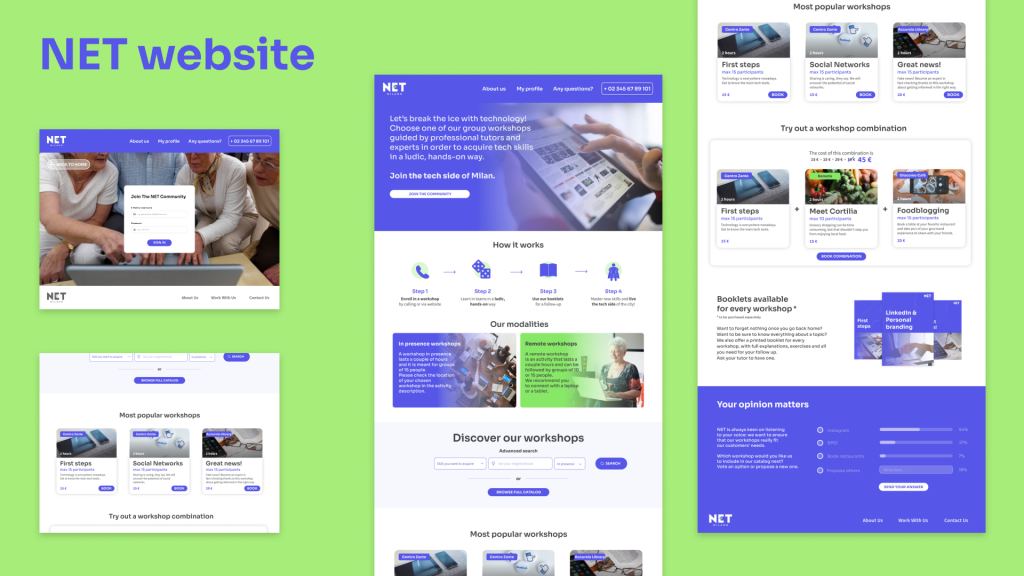 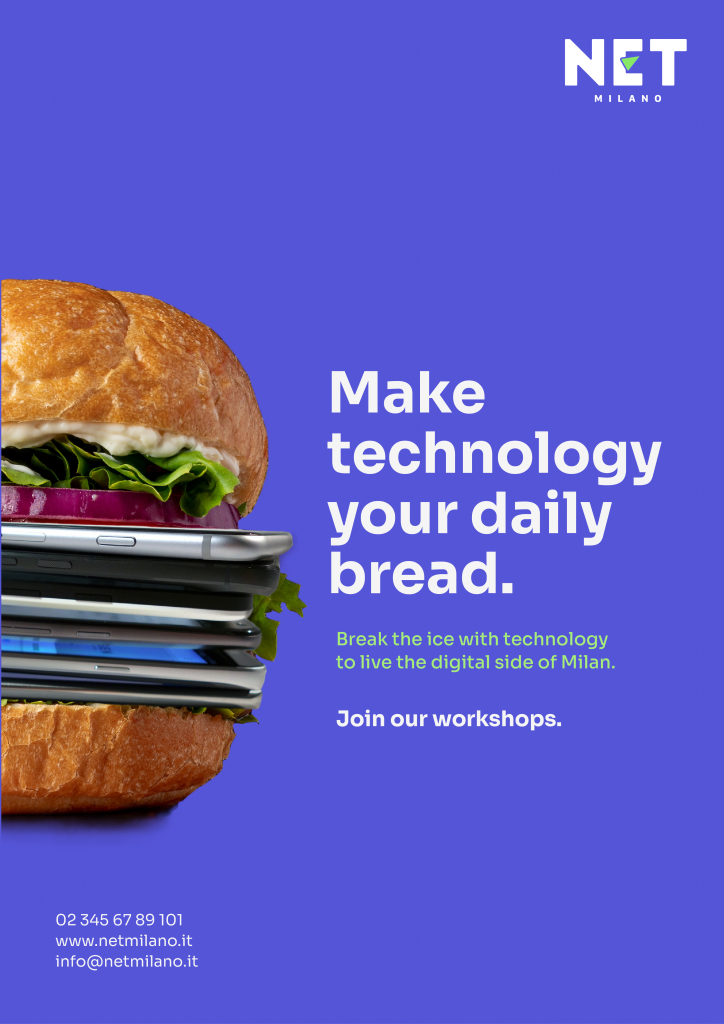 NET offers in presence workshops, online workshops and printed booklets to do follow ups. Each workshop lasts 2 hours and is guided by a tutor with the possibility to have a special guest who is an expert in the suggested topic.

The structure of each workshop is the following: first, there is an explanation of key contents, in an easy, concrete way, through every day examples and in a friendly, cafe atmosphere. In the second part, the user has a more active role, even though he is guided through exercises by the tutor with an increasing difficulty. Here the tutor makes sure everybody got the core contents and solves individual problems. In the last part, the workshop turns into a playground, with group games and funny challenges, which help the user remember the contents.

NET is a service deeply entwined with the local community. Hence, to enhance the city businesses and services, our in presence workshops, which are meant for maximum 15 people, can be held in various locations in Milan like local shops, activities and places in the topic.
The online workshops are meant for users with a higher basic knowledge. They are ran via streaming on Zoom for a maximum of 10 people, since interacting online can be more difficult than in person. At the end of an in presence workshop it is possible to buy its printed booklet which contains all the explanations and the contents to acquire the desired skill.

Unlike other services, NET offers much more flexibility in building the learning path and the follow up activities. It leverages gamification and group dynamics, considering tech as a medium to enable people in daily life and empower their creativity and not as the final goal, valuing technology in a local perspective. Everyone is free to either attend only one workshop or to create a unique learning path following their passions.

Overview of the issue and the approach: To solve the problem, we as a team used the design thinking approach, starting from a research phase from a brief. This first phase included a desk and a field research, which focused more and more on the Milan area as they proceeded. The desk research led us to have scientific proof and quantitative data about the actual situation of cities regarding digitalization. The user research was conducted in almost every stage of the project, in order to always reconnect to the actual user needs and wants. These quantitative and qualitative were crossed in order to reach a problem statement point, in a first “converge” phase. Here the focus of the project was clarified to be about non tech-proficient adults and digital services that they use on a daily basis. A specific target was identified and interviewed, as well as some experts. An ideation, diverging phase followed, some ideas were analysed and the implemented one was the most coherent with the needs of our target users and the community. A competitors’ analysis was employed in order to better understand the environment in which the new born service was about to place itself. Then the idea was refined and tested in several iterations which focused on the concept, then on the interactions and the interfaces involved. In fact, the project was conducted with a practical approach, as if this concept was about to become a real startup. That is why the whole structure was analysed from a business perspective too, with tools such as business model canvas, analysis of the investment and hypothesis of scaling up. The whole process, including the interviews and user tests were performed in a remote manner. The concept was brought to life through the design of a website and paper material and advertisement, whose UX and UI specifically address the concept’s target.
The essence of the solution: NET is a service that provides short workshops which help non tech-proficient people break the ice with technology in a practical way and in partnership with local activities.
The stakeholders in the project: Workshops are held by tutors (who teach digital skills) and guests (experts in a specific skill, such as photography, cinema... or owners of local businesses). Guests are from the same city where the workshops are held, so that the local territory is leveraged and valorized. This will become more evident as NET scales up and reaches more and more cities on the national territory. In this way, NET’s offer will mirror the peculiarities of the neighborhood or the city it operates in.
Documents:

We are a multicultural team of six young designers with different backgrounds, from Product to Graphics. We collaborated for our project NET in the Final Studio of the Master from September to December 2020.