Piazzale Corvetto is one of the fundamental nodes of the Milanese road network. After the success of the “Azzaip! This is not a square “, developed as part of the Piazze Aperte program, the street vendors who work every day in this reality have understood its potential as a social space and aim to transform it into a cardinal point for the neighbourhood. The problems of Piazzale Corvetto are many: lack of a strong and recognizable visual identity, lack of spots to have a rest for pedestrians, poor usability of pedestrian paths (especially on one of the two sides of the road, entirely occupied by illegal parking), its reputation as a dangerous and unsafe place and finally the lack of space available for all the street vendors, who are forced to occupy the only available sidewalk in turn. 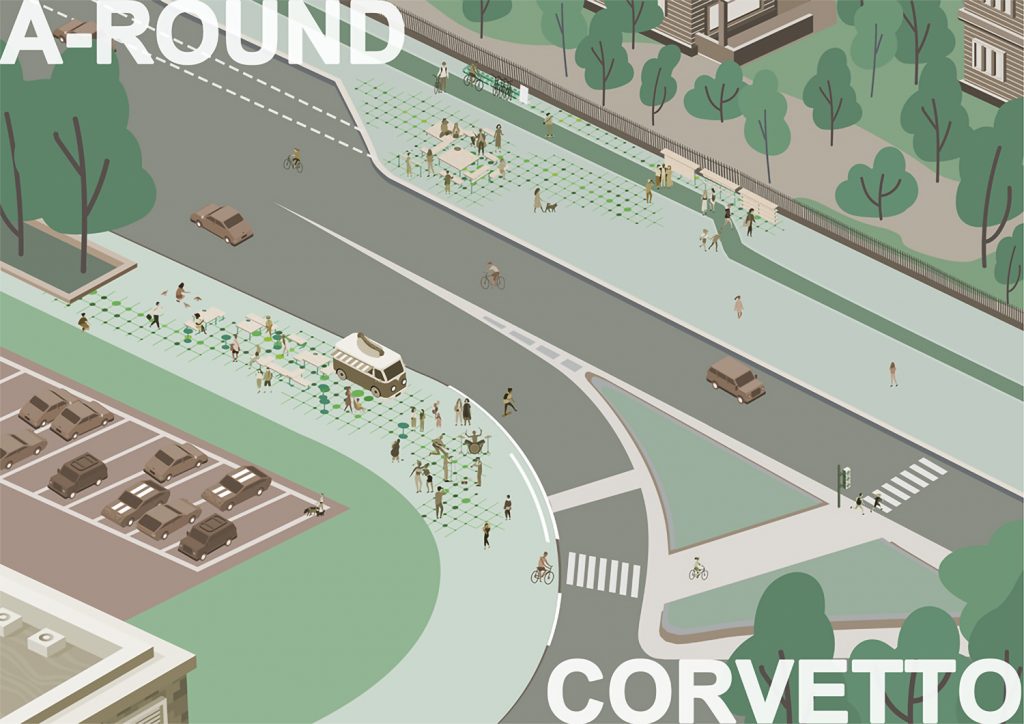 A-round Corvetto is a tactical urban project that aims to improve sociability, in a neighbourhood full of initiatives and activities that struggle to reach a greater audience.
The result is a collective space, that enhances collaboration between different realities and cultures. The aim is to create connections between people, symbolized by the ground pattern, a net, that is also a tool for social distancing.

Overview of the issue and the approach: The project, developed between March and June as part of an academic course, was carried out in close collaboration with one of the street vendors present in Piazzala Corvetto, who spoke out for their requests. In the co-design phase, some exponents of various associations and organizations working in the area were involved. By doing this, it has been possible to identify the Corvetto community's real needs and translate them into a series of activities to be carried out in a hybrid space.
To improve accessibility to pedestrian walkways, the first decision was to move car parks to a nearby side street, changing this two-way street to an alternative one-way street.
In this new space, given back to the community and passers-by, it was decided to create a street food area. The choice has a two-fold motivation. On the one hand, this allows street food vendors (currently forced to work only in the afternoon since their space in the morning is occupied by stalls selling clothing) to have a place where they can establish themselves permanently. On the other hand, they have been willing to take care of the new space and urban furnishings and monitor safety, improving liveability as possible.
On the other side of the street, it has been chosen to install street furniture to create a meeting place and allow passers-by the opportunity to sit down and take a break. Since the project has been developed in the first period of the Covid-19 Pandemic, the place has also been designed to host the meetings of numerous associations present in the neighbourhood. In this case, the aim is not only to ensure the possibility of a physical meeting in safety, but also to involve the inhabitants more and put them in contact with these associations.

The essence of the solution: The project aims to transform a road junction into an hybrid space and a cardinal point for the inhabitants of the neighbourhood, hosting a street food area, a meeting area and a “wall of kindness”.
The stakeholders in the project: A-round Corvetto aims to be part of the "Piazze Aperte" program, financed by Milan's Municipality. First of all, the stakeholders are the street food vendors, who would have the opportunity to get a dedicated space for themselves, would also take care of the place. The associations, united under the name of "Rete Corvetto", could take care of the meeting area's maintenance. Finally, the other street vendors have expressed their willingness to manage the "wall of kindness".
Documents: