The site before the proposal consists of a cluster of residential towers in different construction stages that are relatively placed close to one another. They all have the same typology, style and height in which these towers rest on a multi-storey parking structure as a podium. However, the density, the organization and proportion of these towers made the site look as a dense concrete jungle of towers that lacks an interactive space for the residents to socialize. Although, the rent is relatively cheap, yet the design of these typologies does not accommodate bachelor housing, making it a major problem in Ajman. The bachelors currently live in labour camps and share an apartment with a minimum of four other men, living together with very minimal privacy. Even married men chose to live with other bachelors as they cannot afford zones that cater to families. So the project provides flexibility of modular housing units that can be adjusted to everybody’s needs. 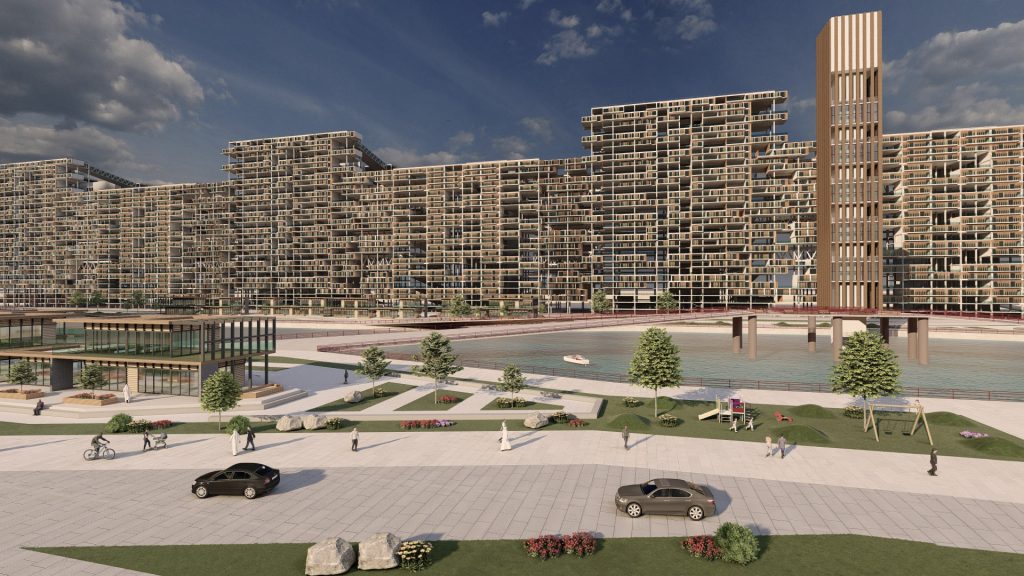 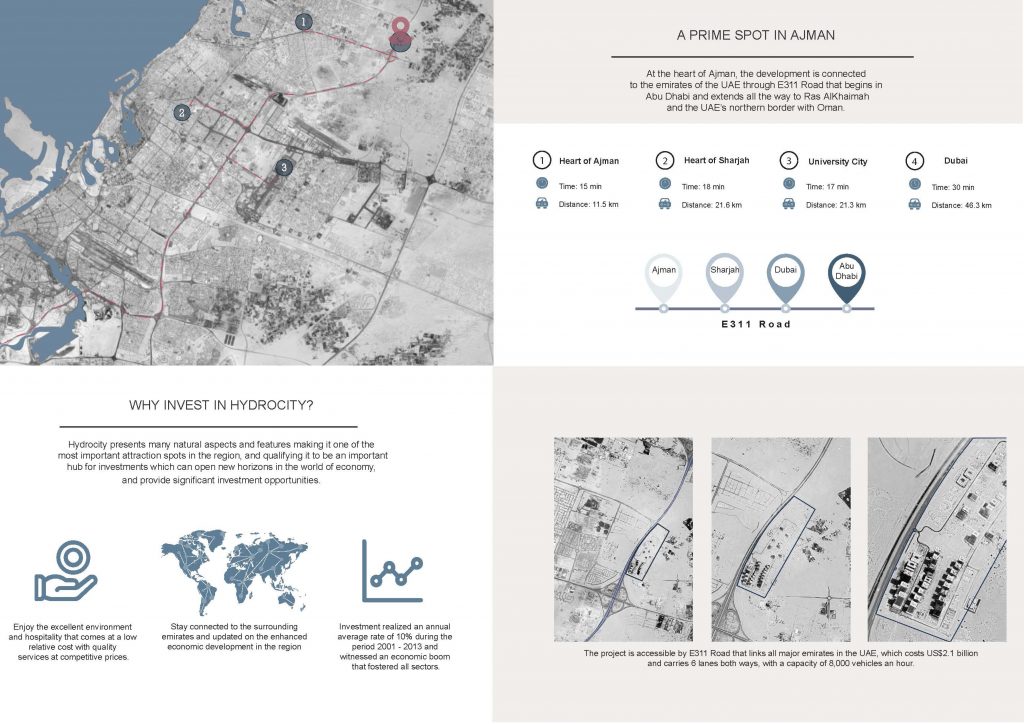 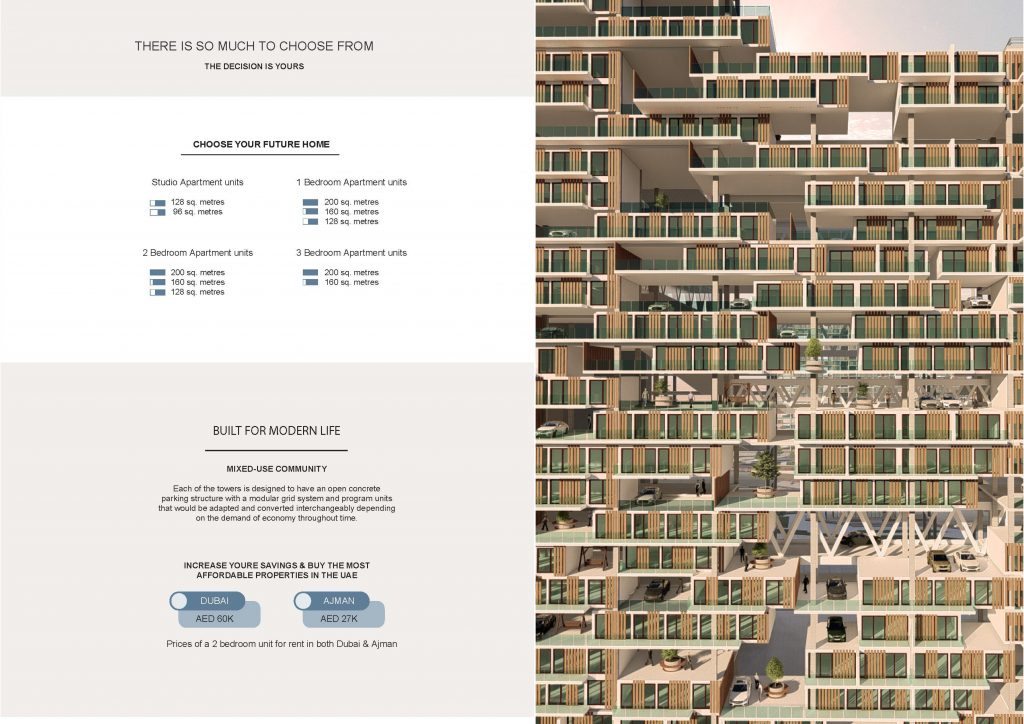 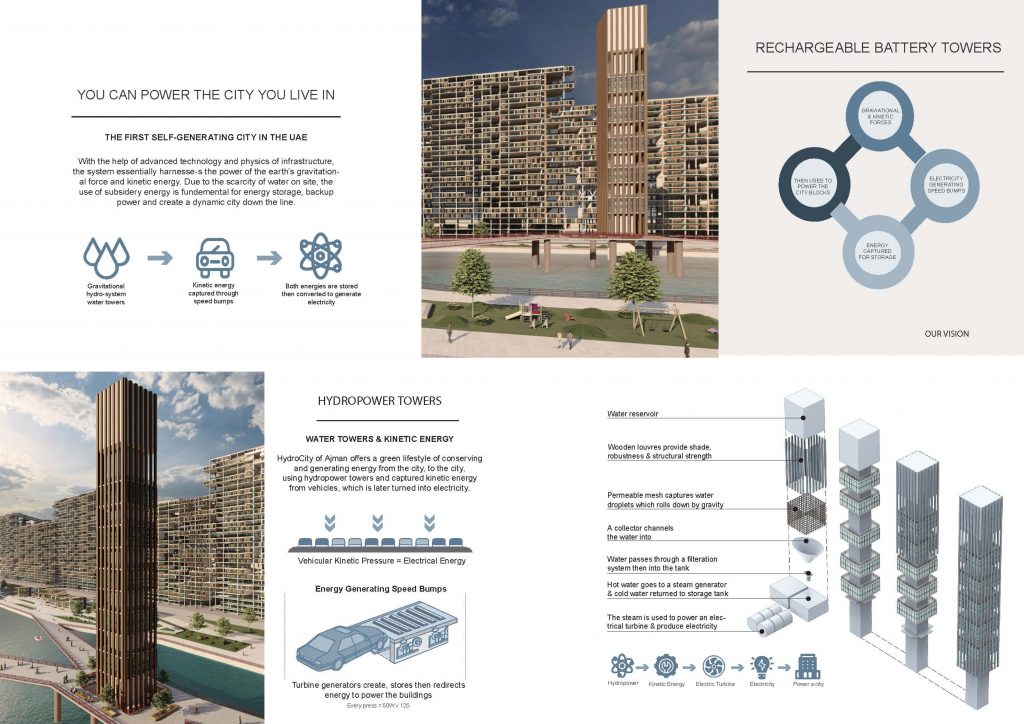 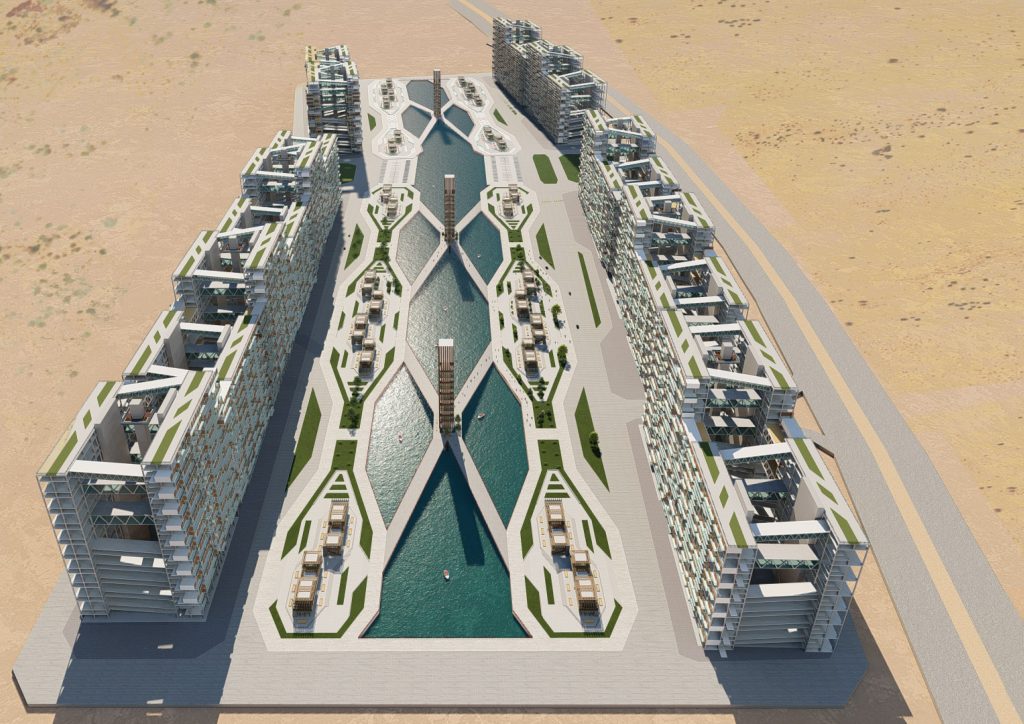 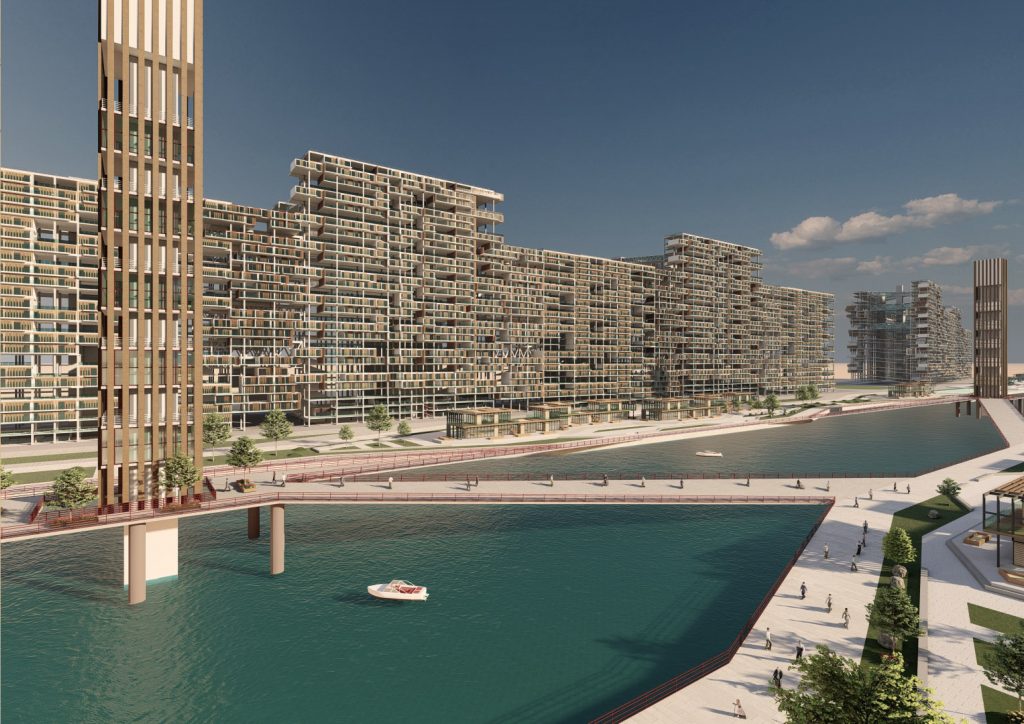 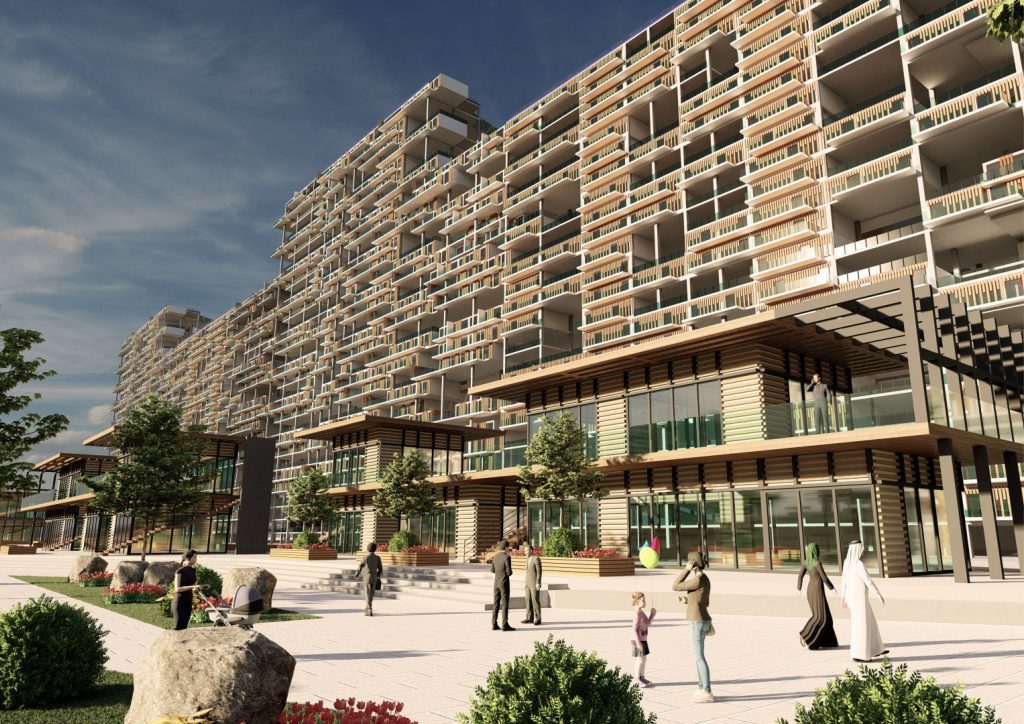 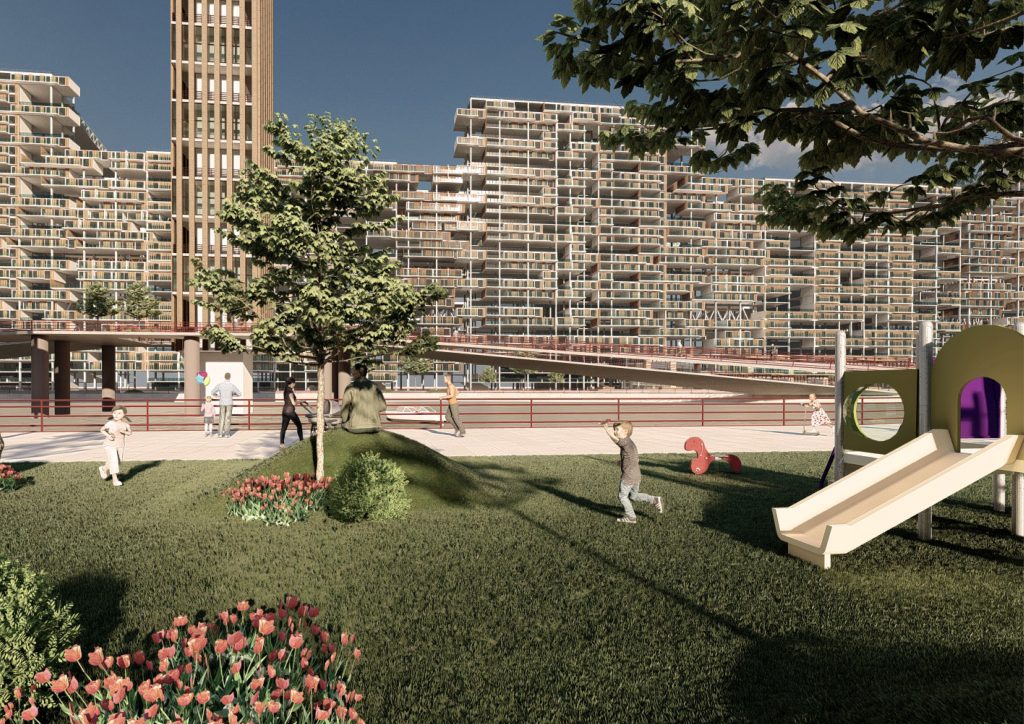 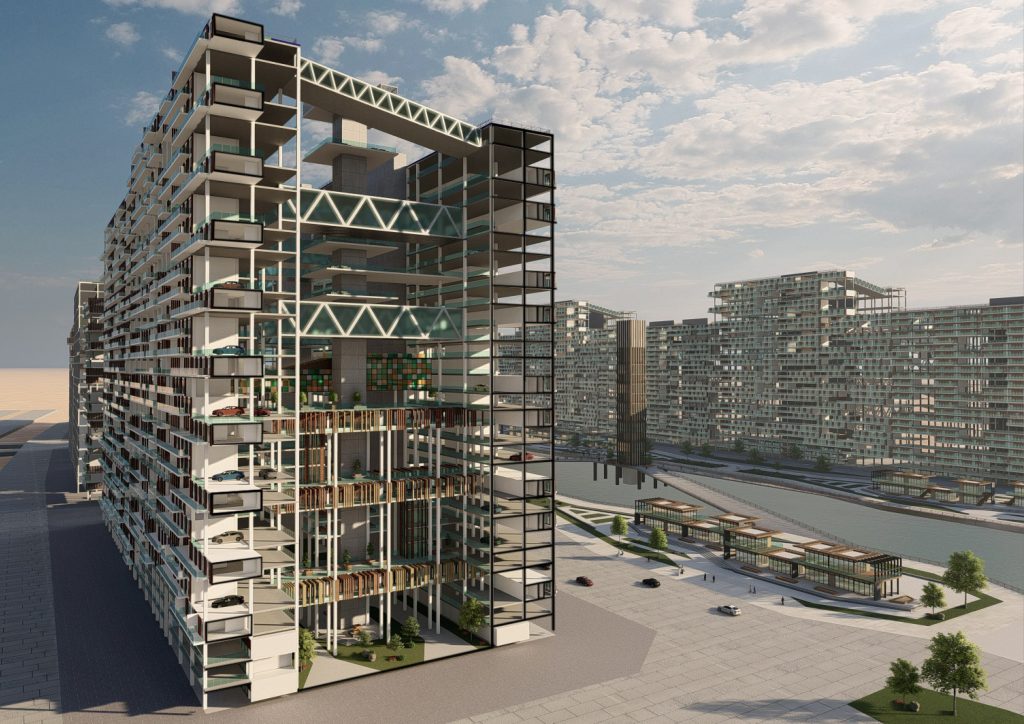 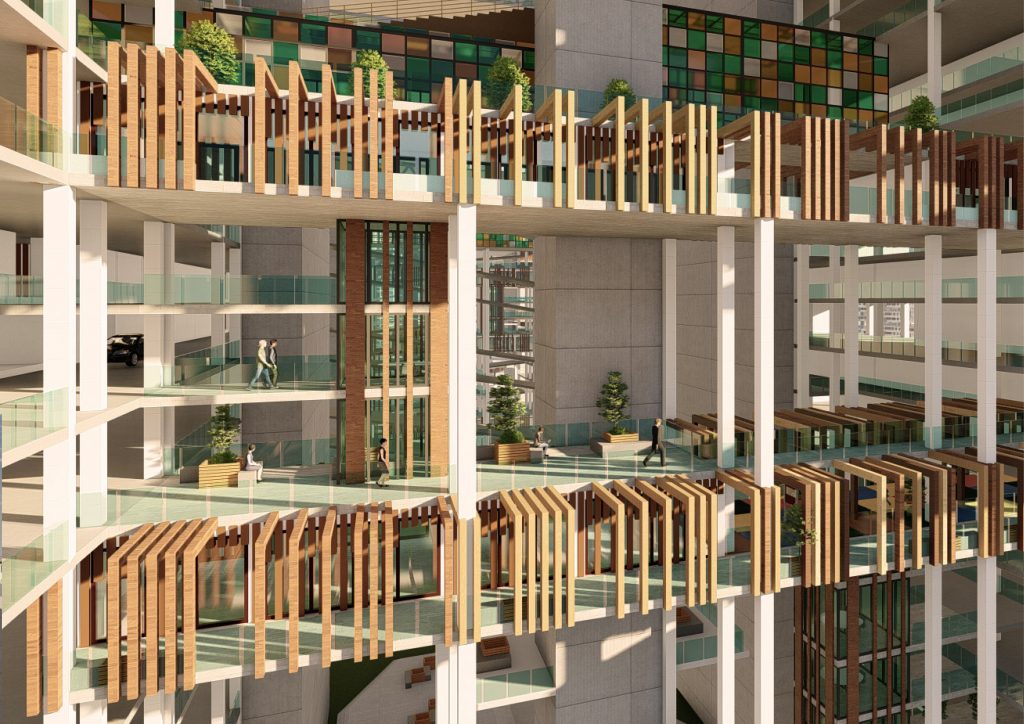 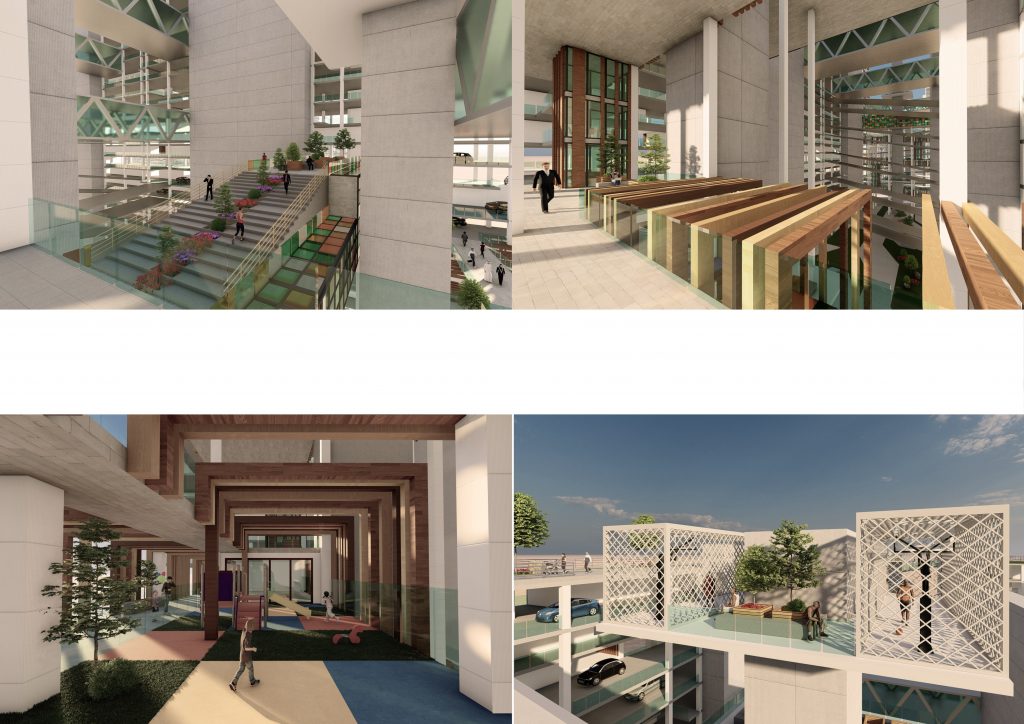 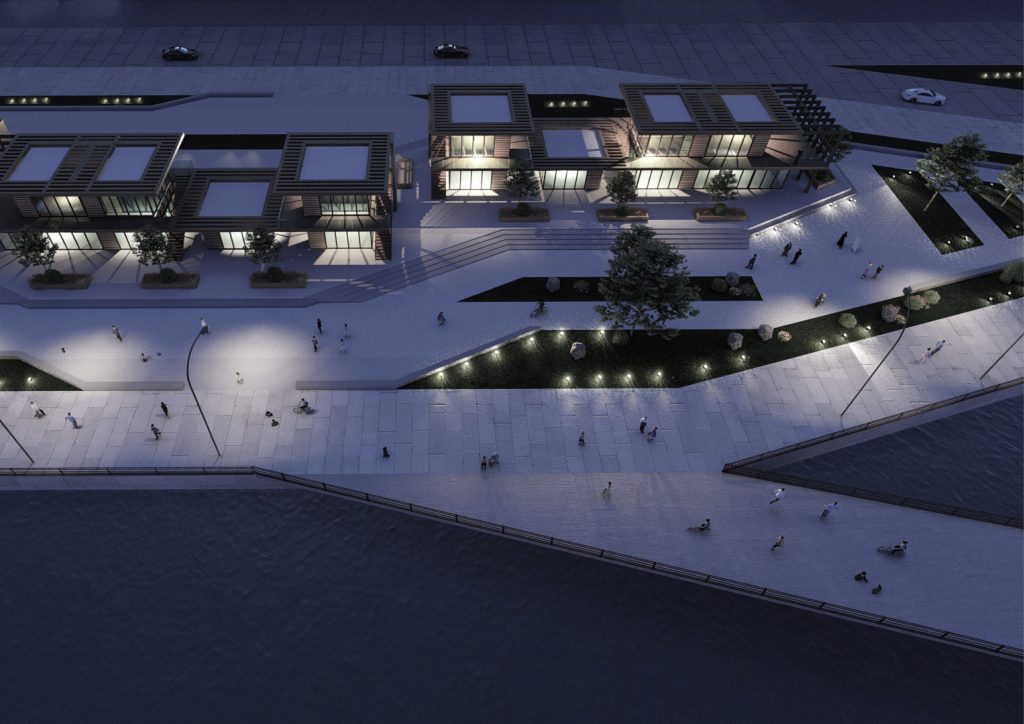 Hydrocity of Ajman represents a place of a sustainable modern mixed-use project offering offices, residential units,commercial and entertainment programs within one tower.

The project also addresses 3 main points of resiliency which are economic, social and environmental.

Economic- Each of the towers is mainly designed as an open concrete parking structure with a central courtyard and a modular grid system with modular size program units that would be adapted and converted interchangeably depending on the demand of the economy over time.

Social- The project proposes various scales of public space both within and outside the tower just to create a variety of leisure experience for all age groups. For example, we have sky dine that is in the hydropower tower and other wide range of entertainment, commercial and retail facilities that all overlook a panoramic view of the central water body in the proposal.

Environmental- The project proposes the use of hydropower towers which are located in the center of the master plan and captured kinetic energy from vehicles. So, both of these forms of energy are used to generate electricity and provide it back to the grid and the hydrocity block sustainably.

Overview of the issue and the approach: The driving forces for urbanization in Ajman express that residential housing is designed primarily to be fast constructed and mass produced, as well as, efficient and highly profitable. Currently Ajman acts as a sanctuary to expats who seek a cheaper cost of living while commuting to Dubai every day for work. Its affordability acts as the sole selling point for its residents. However, Ajman lacks a sense of community and belonging due to the architecture acting as a mechanism for social and economic growth without considering the surrounding culture and the local built-in context. As a result, the city is becoming dull where its lacking engaging architecture that would help increase the city's revenue . So the project offers a green lifestyle of conserving and generating energy from the
city, to the city, using water towers and captured kinetic energy from vehicles, which is later turned into electricity. Situated in a dynamic community, the project provides a balanced combination of sustainable and urban living of both private and public social spaces that house many activities within the courtyard area, such as basketball courts,gym, arcade spaces, bowling alleys and even Zen yoga classes. Having all of the amenities within one tower, this enables the residents to have a safe lifestyle while especially being physically distanced from the rest of the city, protecting their health and well-being.
Each tower is designed to have an open concrete parking structure with a modular grid system with modular program units that would be adapted and converted
interchangeably depending on the demand of the economy throughout time. The tower design addresses concepts of porosity of exterior spaces, flexibility of programs and connections between public and private amenities, through ramps and bridges.
The essence of the solution: The project represents a place of modern living that follows the paradigm of live, work and socialize by addressing 3 points of resiliency which are economic, social and environmental.
The stakeholders in the project: The project helps future investors and developers to utilize every area with flexibility to be accommodated for either residential, office or retail units. Also, the water feature in the center of the master plan , acts as a great attraction spot for the people within and outside Hydrocity of Ajman. This space offers many restaurant places, water entertainment activities such as fountains and boat cruising. Moreover, the battery towers will help to generate electricity back to the city.
Documents: