Levitated Community investigates the evolving qualities of urbanity in today’s society where land has been so scarce along with the politicization of it to curb the freedom of speech of the people. Our proposal seeks to negotiate the complex geopolitical relationship between autonomous Hong Kong and China, while prognosticating a future for Hong Kong’s state of being after guaranteed autonomous rule ends starting from the year 2047. It is an architectural elucidation and perpetuation of a condition of cultural practice rather than codification China’s ascendancy and Hong Kong’s anxieties – a perverted sense of history repeating itself, a situation that demands to be assuaged for stability. Architecture is an important part of democracy. But it’s not enough to simply mix glass, concrete and green spaces. 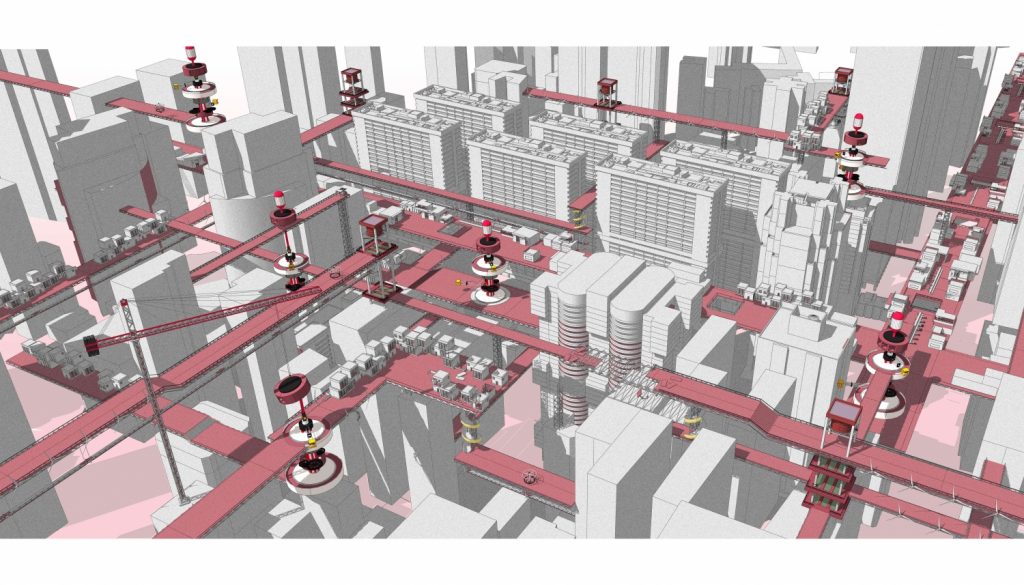 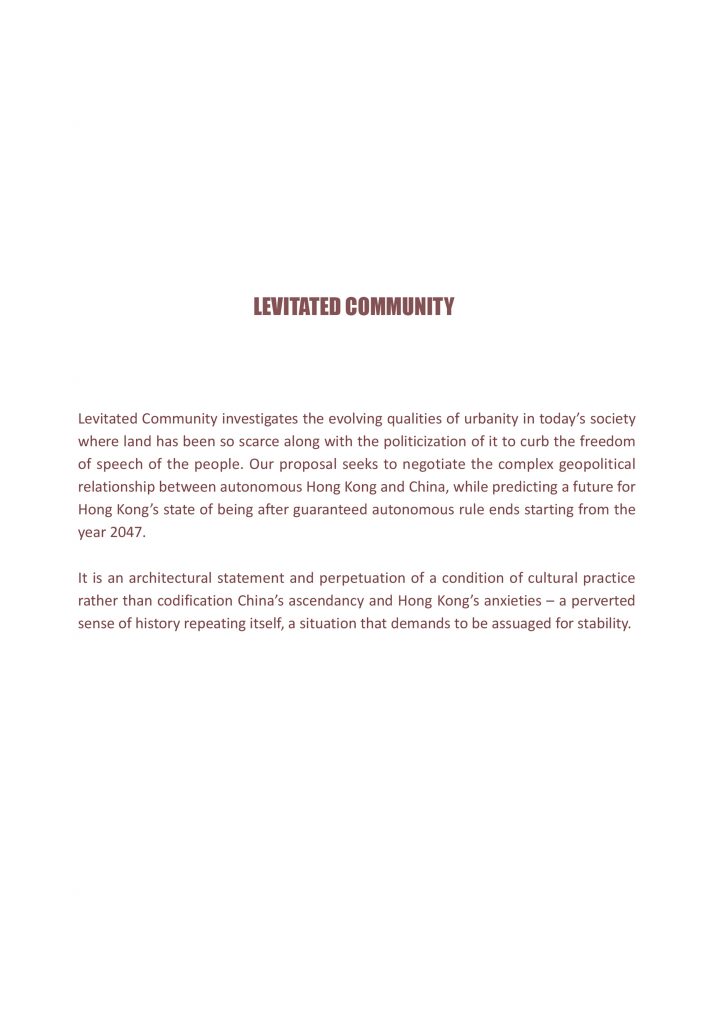 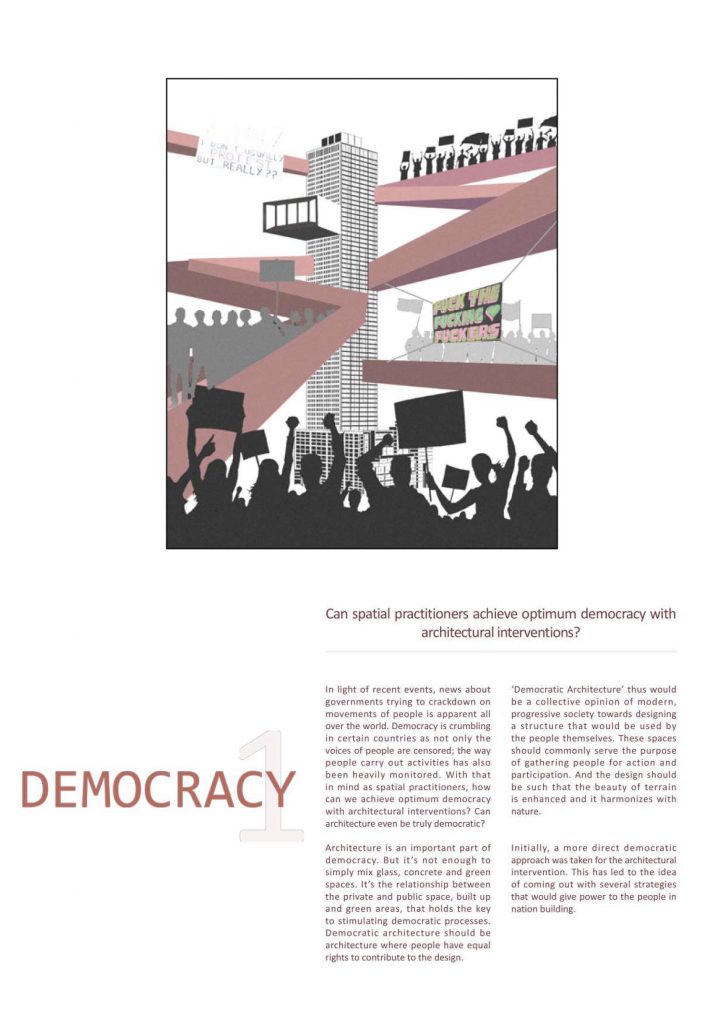 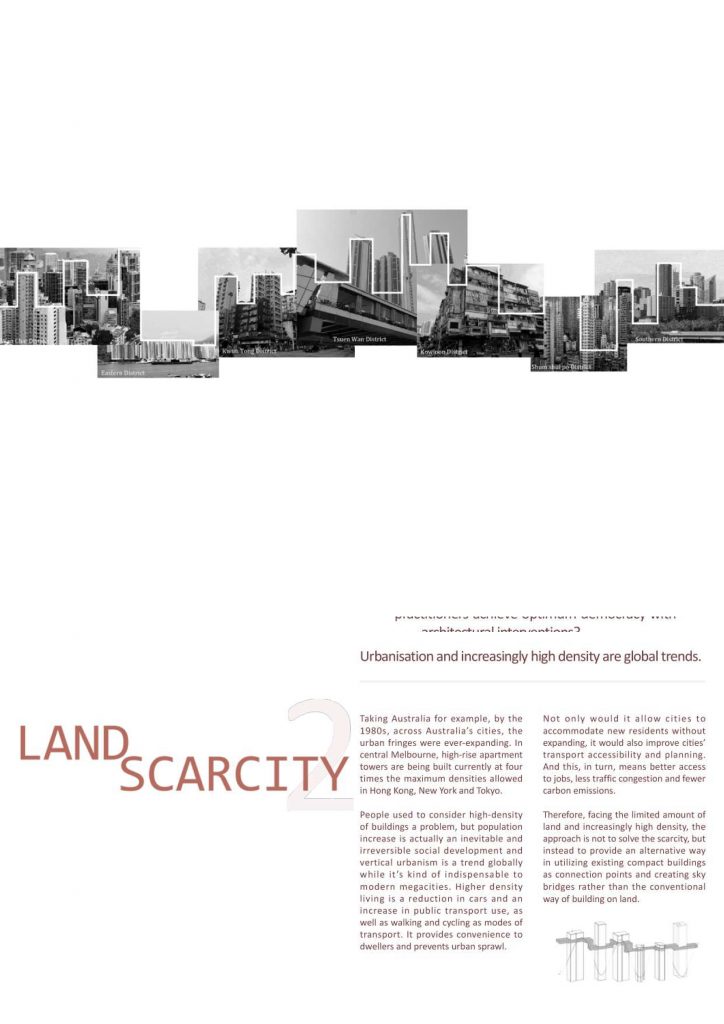 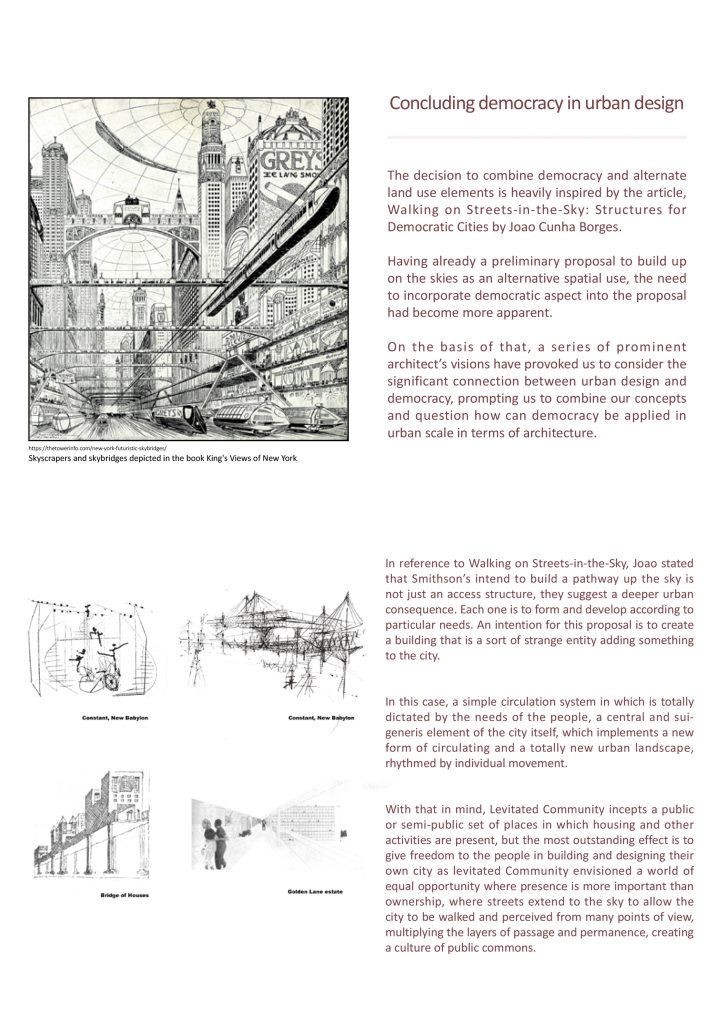 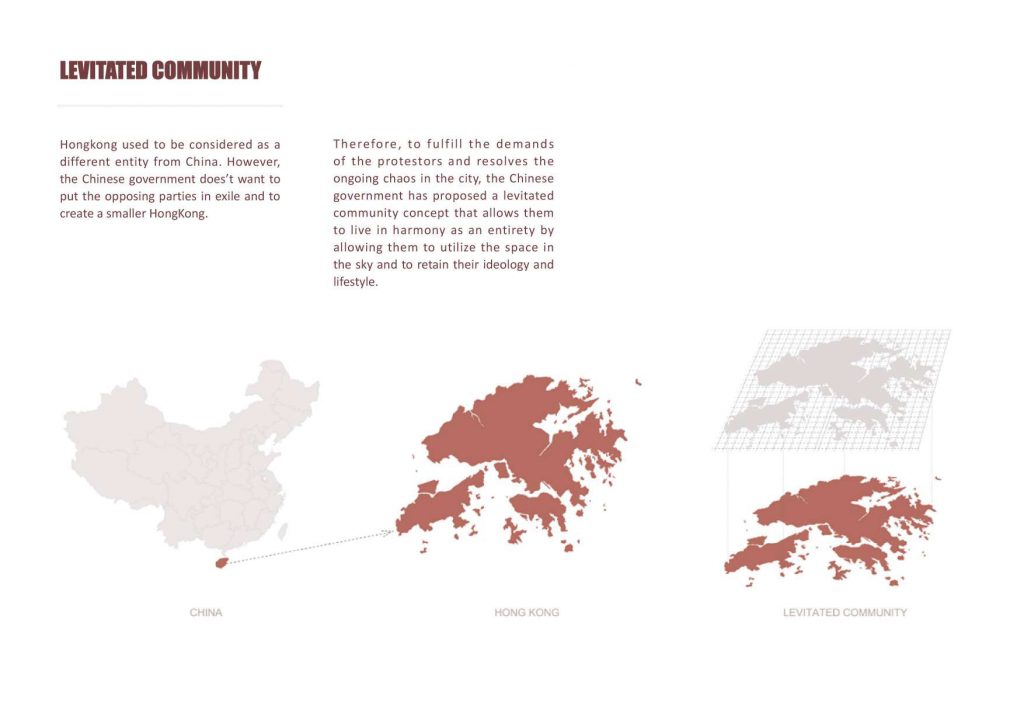 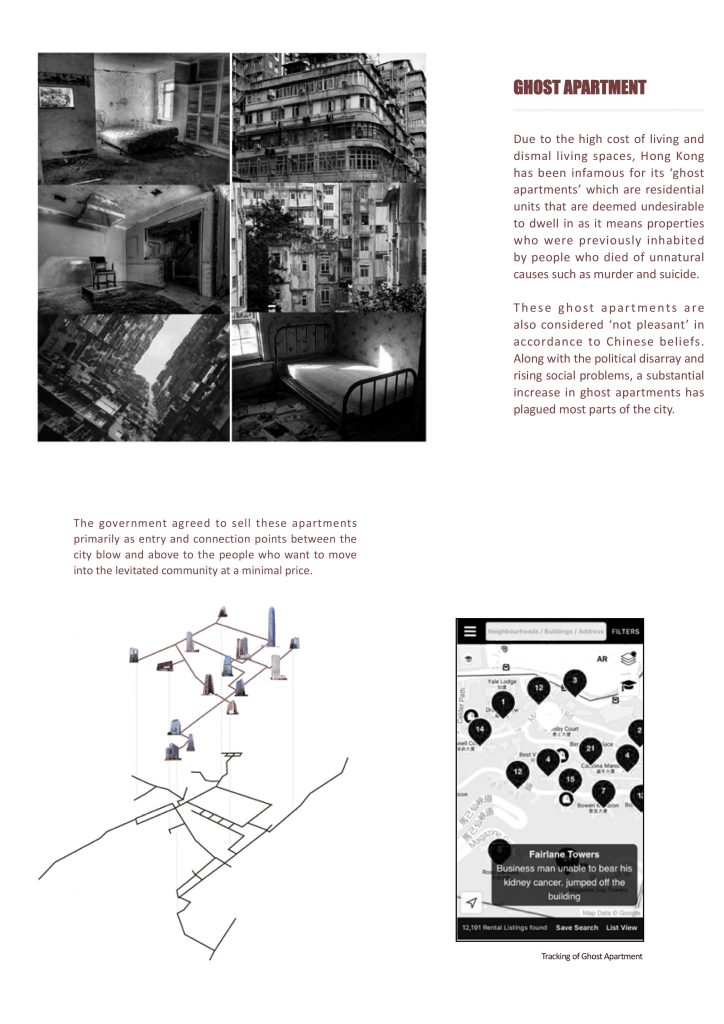 The decision to combine democracy and alternate land use elements is heavily inspired by the article, Walking on Streets-in-the-Sky: Structures for Democratic Cities by Joao Cunha Borges.

In reference to Walking on Streets-in-the-Sky, Joao stated that Smithson’s intend to build a pathway up the sky is not just an access structure, they suggest a deeper urban consequence. Each one is to form and develop according to particular needs. An intention for this proposal is to create a building that is a sort of strange entity adding something to the city. In this case, a simple circulation system in which is totally dictated by the needs of the people, a central and sui-generis element of the city itself, which implements a new form of circulating and a totally new urban landscape, rhythmed by individual movement.

With that in mind, Levitated Community incepts a public or semi-public set of places in which housing and other activities are present, but the most outstanding effect is to give freedom to the people in building and designing their own city as levitated Community envisioned a world of equal opportunity where presence is more important than ownership, where streets extend to the sky to allow the city to be walked and perceived from many points of view, multiplying the layers of passage and permanence, creating a culture of public commons.

Overview of the issue and the approach: China has guaranteed Hong Kong the authority to self-govern in terms of economic and political systems for 50 years after the transfer from the British, which means in 2047, Hong Kong will lose its autonomous power and governed entirely under the CCP. Hong Kong has always been a city of civil unruliness, from opportunistic and subversive appropriations to occasional public disruptions within its urban canyons. This is also due to a history of distrust in the government that has ingrained in the minds of people — from the anxieties of the handover, SARS, the handling of the umbrella movement, up to COVID-19. This is a cultural practice that resembles an identity setting apart themselves from the rest of China; the authorities’ tolerance of and reaction to such events serve as a barometer of the health of the unique ‘One Country, Two Systems’ principle”.

People used to consider high-density of buildings a problem, but in some ways vertical density is a trend while it’s not only desirable but indispensable to modern megacities. It provides convenience to its dwellers, reduces unnecessary travels and prevents urban sprawl. The high concentration of people, goods and services can reduce land take and greenhouse gas emissions, minimize carbon footprint, create economies of scale, facilitate exchange of information and ideas, etc. Higher density living is a reduction in cars and an increase in public transport use, as well as walking and cycling as modes of transport. Not only would it allow cities to accommodate new residents without expanding, it would also improve cities’ transport accessibility and planning. Denser cities lead to better transport accessibility, and this, in turn, means better access to jobs, less traffic congestion and fewer carbon emissions.


Therefore, the approach towards this research is not to solve the limited amount of land, but instead to provide an alternative way in utilizing spaces rather than the conventional way of building on land.


The essence of the solution: Providing a city for people opposing the Chinese after 2047 government while giving them the freedom to design their own city, at the same time tackling the land scarcity problem in Hong Kong.
The stakeholders in the project: The citizens of Hong Kong

Meixin and I have just completed 3 semesters of our Masters degree in Newcastle, with that, we will be completing our Masters coming June after our final semester. We have been really interested in sustainability through urban design and would like to take this opportunity to demonstrate our ideas and knowledge.