Cities and metropolitan areas of the global south witness rapid urbanization. And the Greater Cairo Region is by no means an exception. Informal urban expansions take over former agricultural land and formally planned new towns stretch far onto desert land, expanding into an agglomeration of more than 100 km at its widest measure. The former twin cities Giza and Cairo dissolve in an agglomeration of multiple cities, an incomplete accumulation of diverse urban patches. Analog to the changing urbanization patterns, the Cairo metropolitan areas of approximately 25 million residents presently transforms along an ever expanding network of widened primary roads and newly build elevated highways that dissect the old districts and living neighborhoods to primarily facilitate the commute toward and from the emerging and growing new towns and satellite cities, morphing the already burdened Cairo into a car-oriented metropolis, eventually externalizing the apparent ecological and social costs. 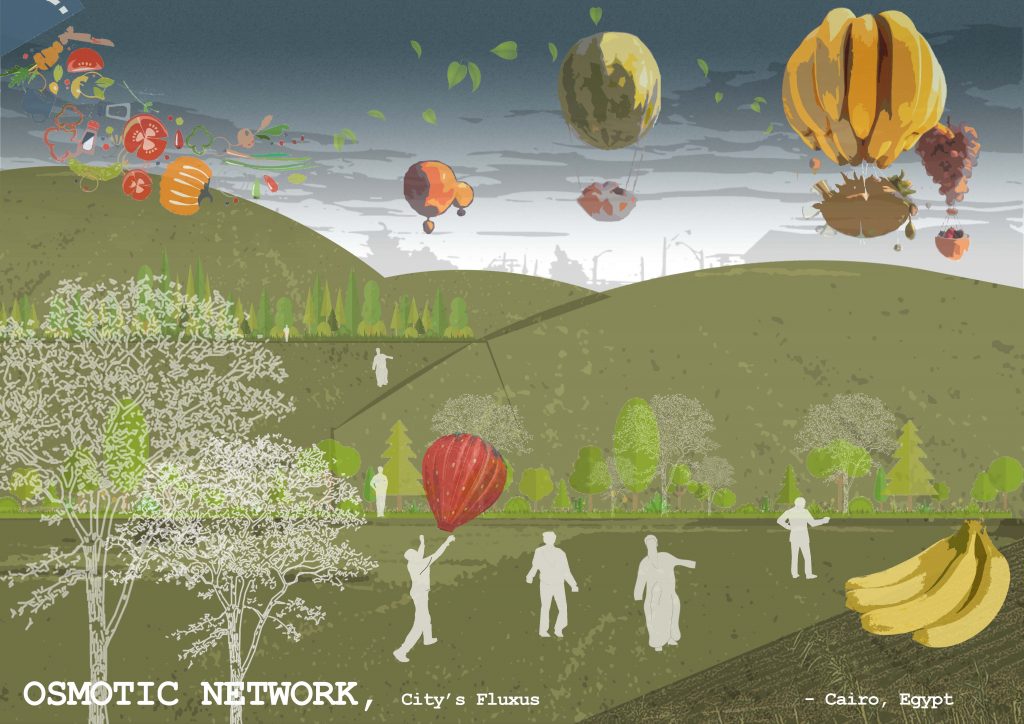 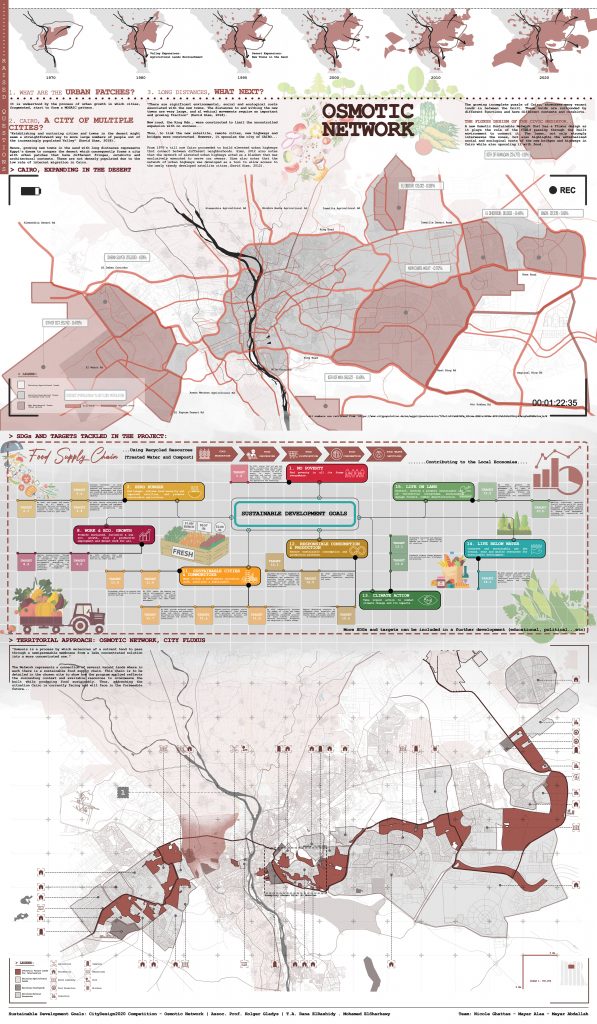 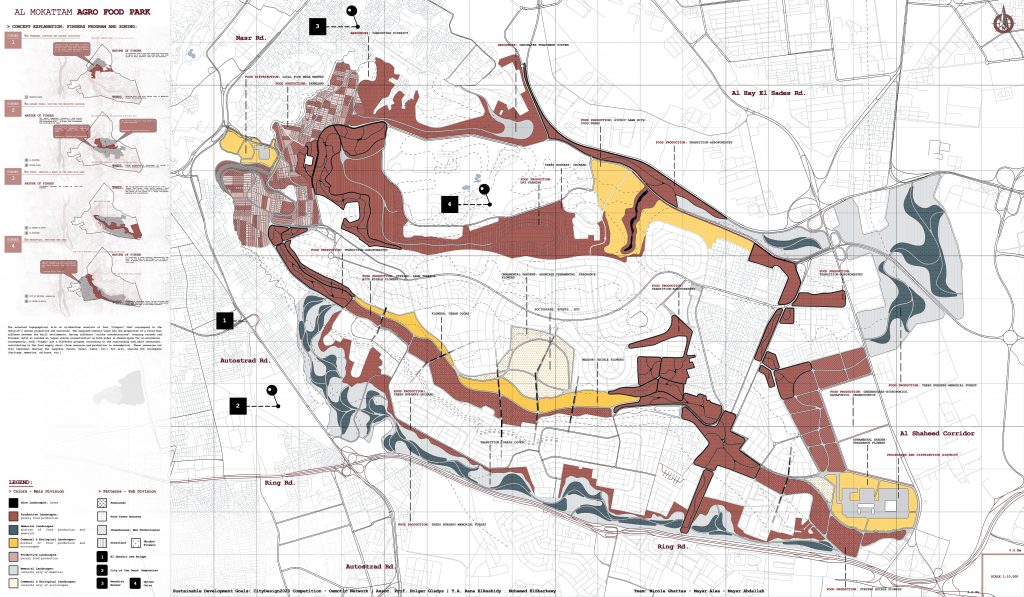 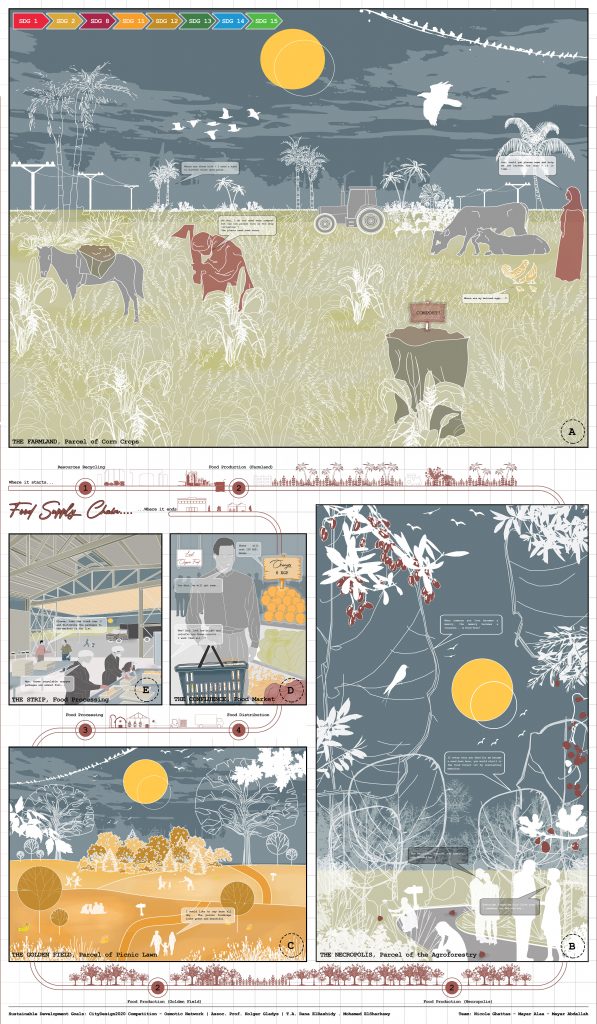 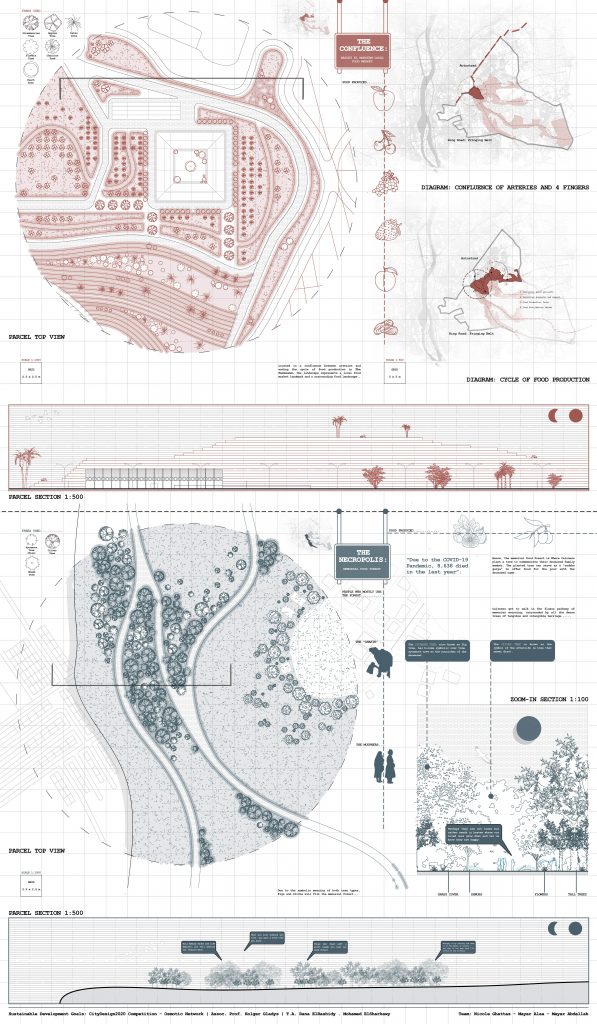 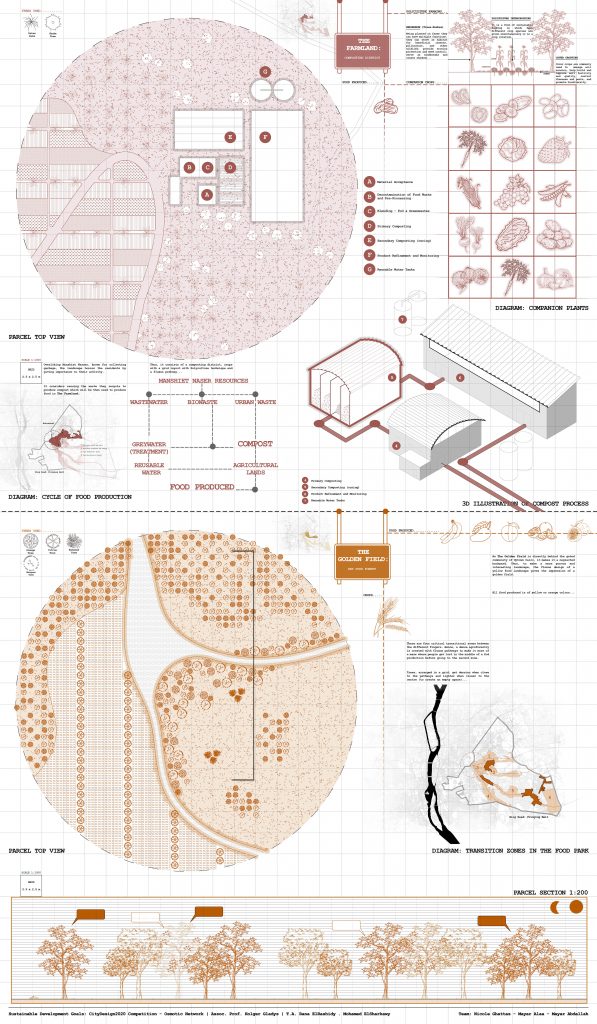 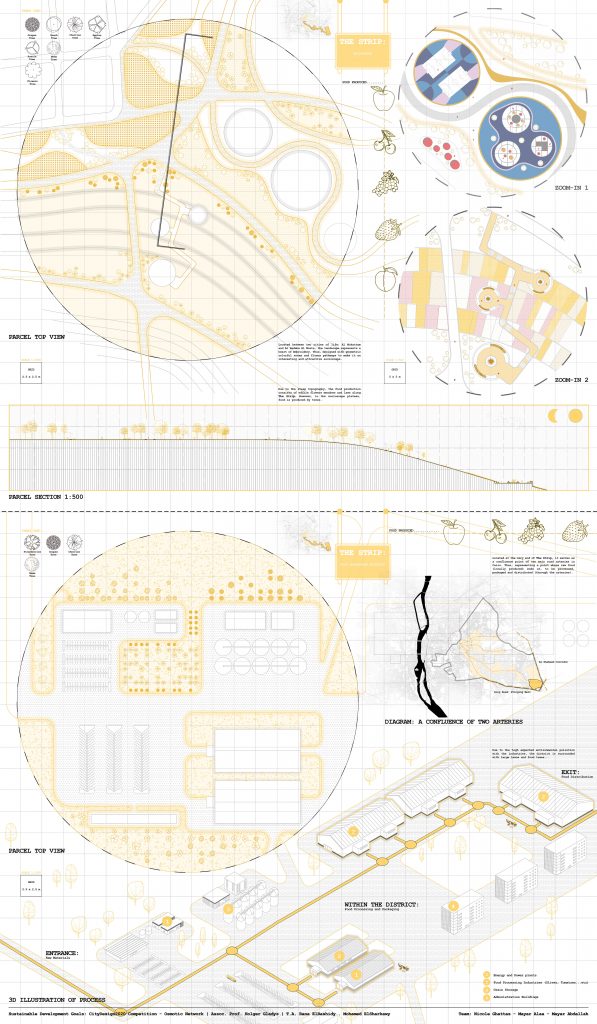 Keywords: Urban agglomeration, food security, food supply chains, foodscapes, socioscapes, new normal, retrofit, repurpose, regeneration, sharing city, tangible and intangible resources, recycling, environmental improvement, in general sustainability. SDG 11, 12, 13 among others.
Have you ever lost a loved one and wished you had a second chance to replay your cards? The typical human only learns to appreciate their loved one when they are fully satisfied…

The selected site, Al Mokattam, reflects the concept with “fingers” spanning over 4 lands representing a complete redo, to convey a deep message of the life cycle story while producing food.

– The design response is divided into two parts: a territorial approach that considers the entire metropolis, and a design proposal that seeks to imagine the ambitious landscape in detail.

From a territorial approach of upscaling Cairo with foodscapes to the selected site of Al Mokattam, spanning on four “fingers”… The shared space for sustainable co-existence is designed as follows:

Finger 1 – The Farmland: overlooking the city of garbage collectors, honors these by reusing their resources (recycled fertilizers and treated water) to produce food and create sustainable polyculture farmlands.

Finger 2 – The Golden Field: between an opaque (gated) community and a transparent (co-housing) community, it repurposes the neglected backyard of the gated area by producing yellow/golden foodscapes of crops and agroforestry.

Finger 3 – The Strip: between two residential communities of life, it represents a food production socioscape using colorful agroforestry and edible gardens with a pattern drawn from extended streets to be connected to the built. It also introduces new food production technologies: hydroponics, aquaponics…etc.

Finger 4 – The Necropolis: overlooking the city of the dead, it remembers the lost loved ones by using Fluxus pathways going through a memorial food forest (with a shape of lungs to breathe the memories).

Foodscapes with a co-created design help, honoring the unrecognized garbage collectors for their input and efforts to give life through sustainable recycled fertilizers for the living lands food. Meanwhile, other plant memorial trees to mourn their beloved lost ones.
Tying the land overlooking the garbage collectors (where the city’s end cycle/rubbish end) to the land overlooking the city of the dead (where humans life end); they both represent main recycled resources (tangible: waste/water and intangible: memories) that contribute to the sustainable production of the living lands food: a source of life… Hence, recycling to represent a Second Chance at life to learn to appreciate things from the beginning before it is too late.
The four “fingers” are connected at both ends with a food processing and distribution spots to be directly transported using the major road arteries surrounding the site. Therefore, a complete sustainable and local food supply chain, interweaving the city towns, that reflect city’s purpose and life cycle.
A city of co-existence with shared and regenerated resources creating food security while fighting climate change. Moreover, a caring city that reflects a deeper message of life and foodscapes/socioscapes.

Overview of the issue and the approach: As the city evolves around more asphalt, the project imagines to counteract the ongoing transformation by speculating on claiming the vacant lands between & left behind by large-scale real estate developments, to retrofit the metropolis with much needed green spaces, yet in times of water scarcity exclusively agro-production. Environmental improvement on all fronts. Productive & aesthetic at the same time. Economic & social, foodscapes as socioscapes. As much as historical maps of Cairo remind us on the important balance between built environment & food production on fertile land, the new layer of urban farmlands & food forests suggests an alter-urbanism as a much needed retrofit to the 20th-century planning models that dominate our time-honored city.
The Design:
WHAT? The “Osmotic Network” merges a creation of foodscapes & social green spaces, while strongly interweaving the new towns & repurposing the vacant lands between the built. Each green string imagines a sustainable food production & supply chain. The new urban layer doesn’t go against the drift yet seeks to enable new kinds of shared living environments.
HOW? The selected topographical site (al-Mokattam) consists of four “fingers” corresponding to the district’s uneven properties & resources. The imagined osmosis-layer has the properties of a fluid diffusing between the built settlements, of different “solute concentrations” (varying context & fringes) until it reaches an “equal solute concentration” on both sides (shared space for co-existence). Hence, each “finger” has a different program (according to the surrounding available resources), contributing to the food supply chain (from resource/production to consumption). These resources represent sharing the tangible (waste, water, labor, etc) AND the intangible (heritage, memories, cultures, etc). The “fingers” complete the regenerative city’s cycle: reusing/recycling, retrofitting, & repurposing resources while conveying a strong message of life’s cycle.
The essence of the solution: Philosophical Approach: A city represents the humans life cycle (birth/cityscape to death/cemeteries). In addition, foodscapes are the source of life. Hence, merging both cycles as a design response.
The stakeholders in the project: Youth Centers, NGOs, Farmers, Agricultural Suppliers & Services, Food Distributors and Processors, National/Regional Health Protection Agencies, National/Regional Environmental Protection Agencies, Residents and Caireness, and Scientists.
Documents:

The German University in Cairo