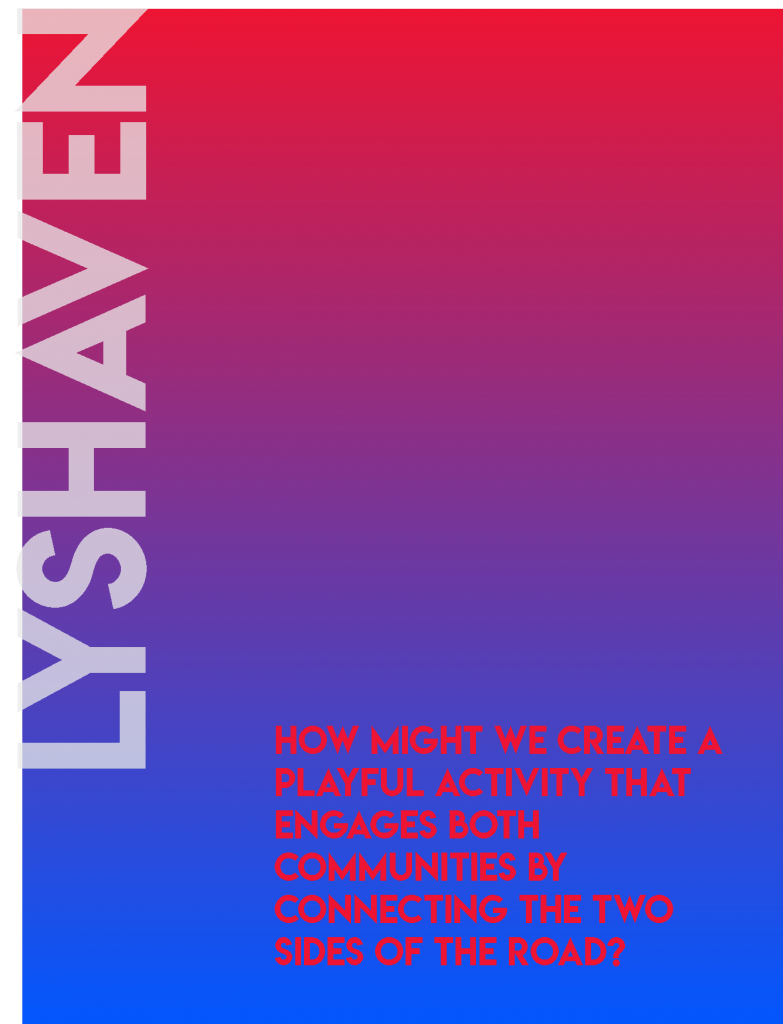 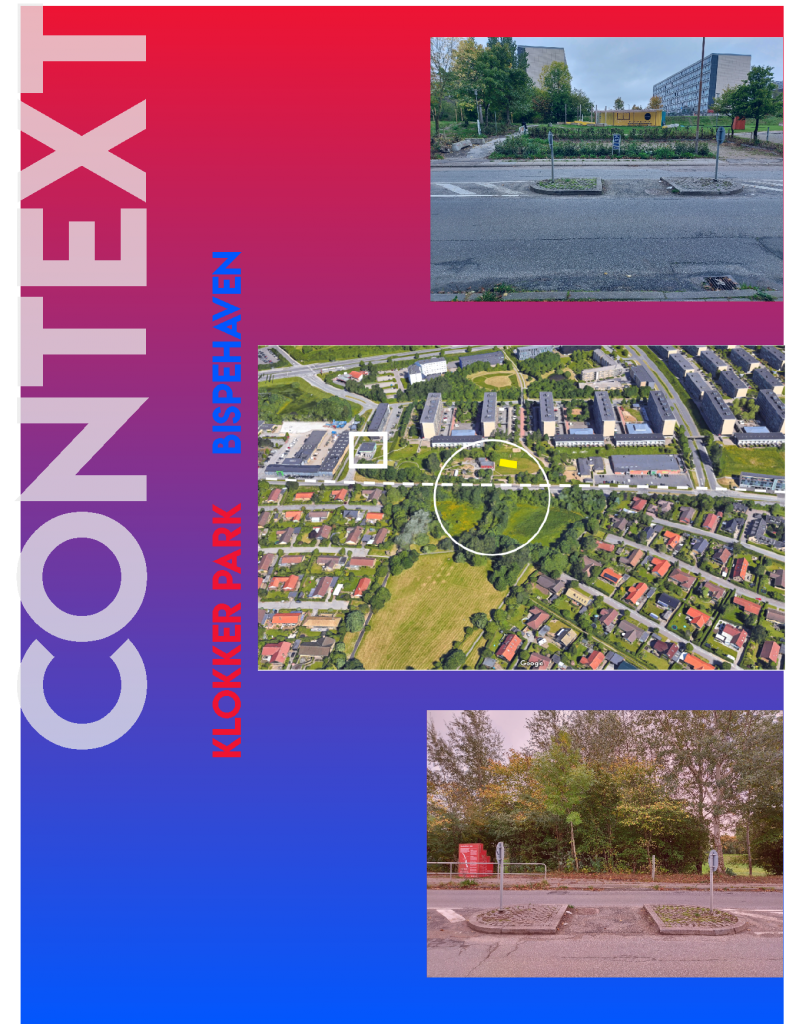 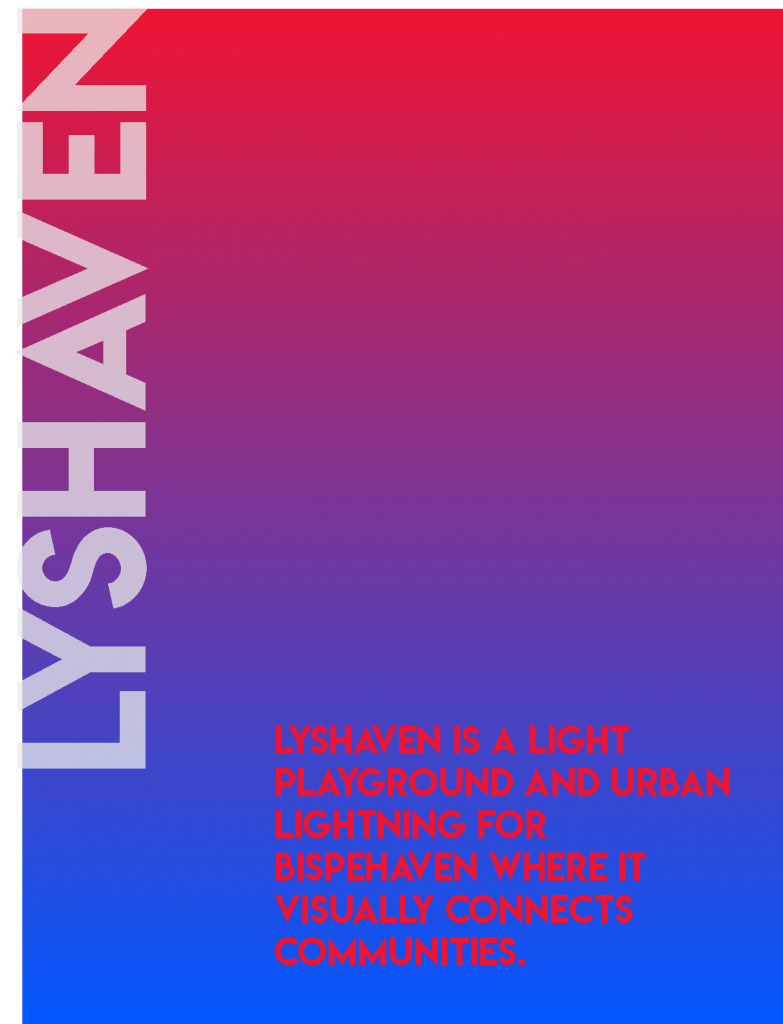 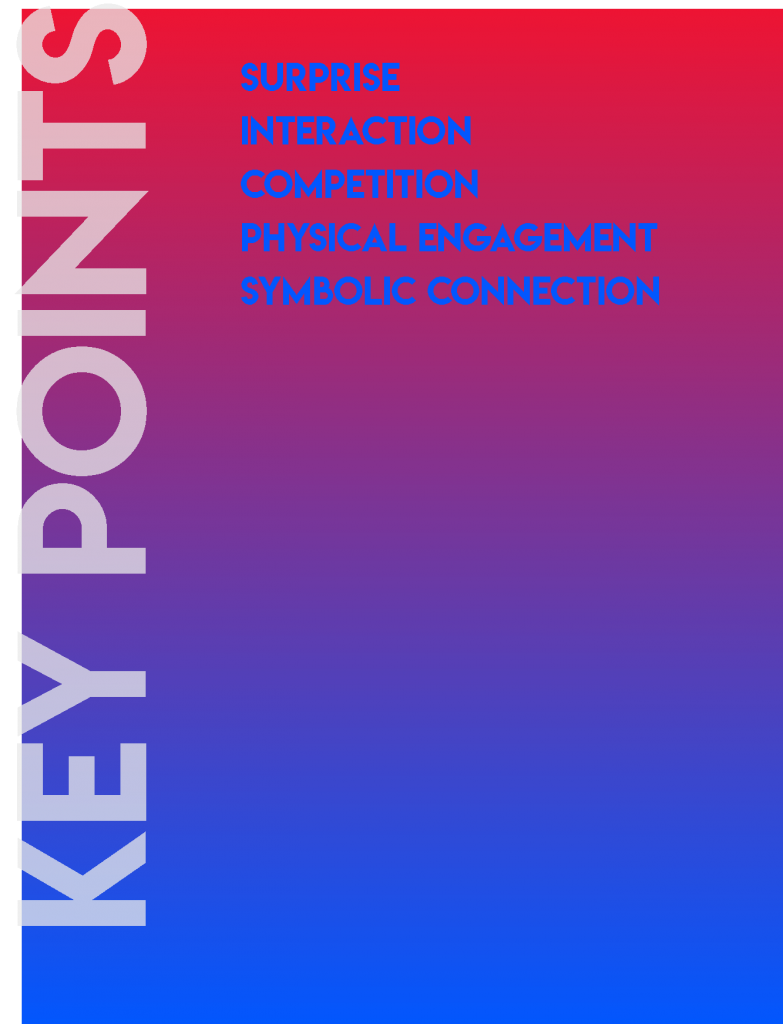 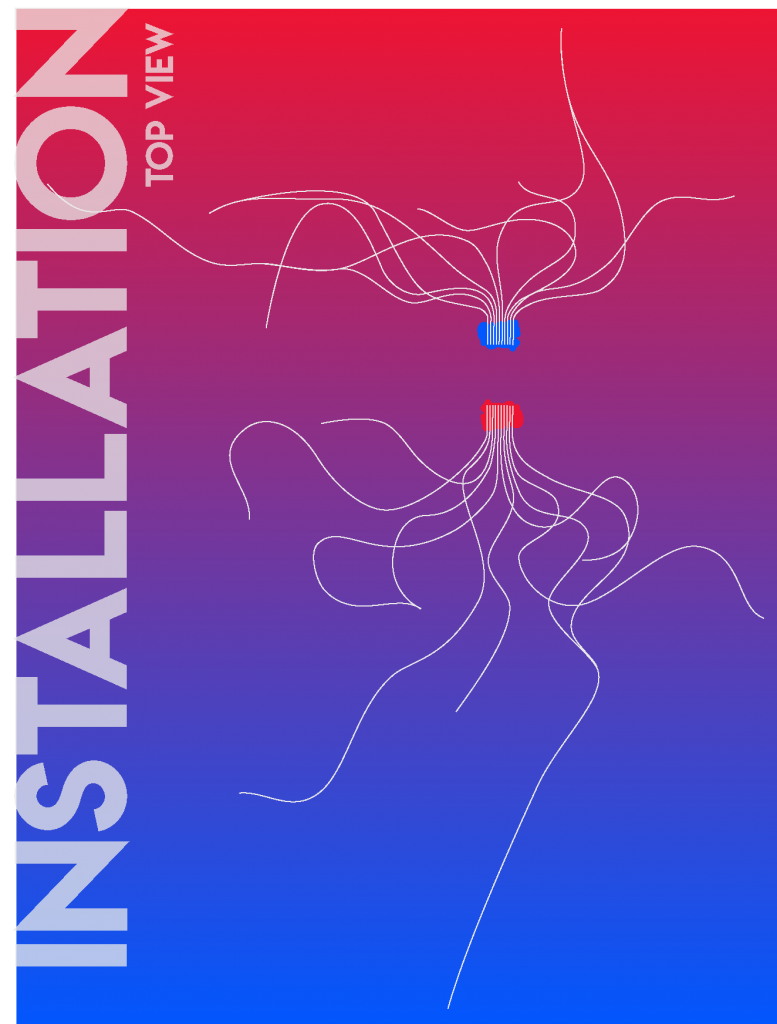 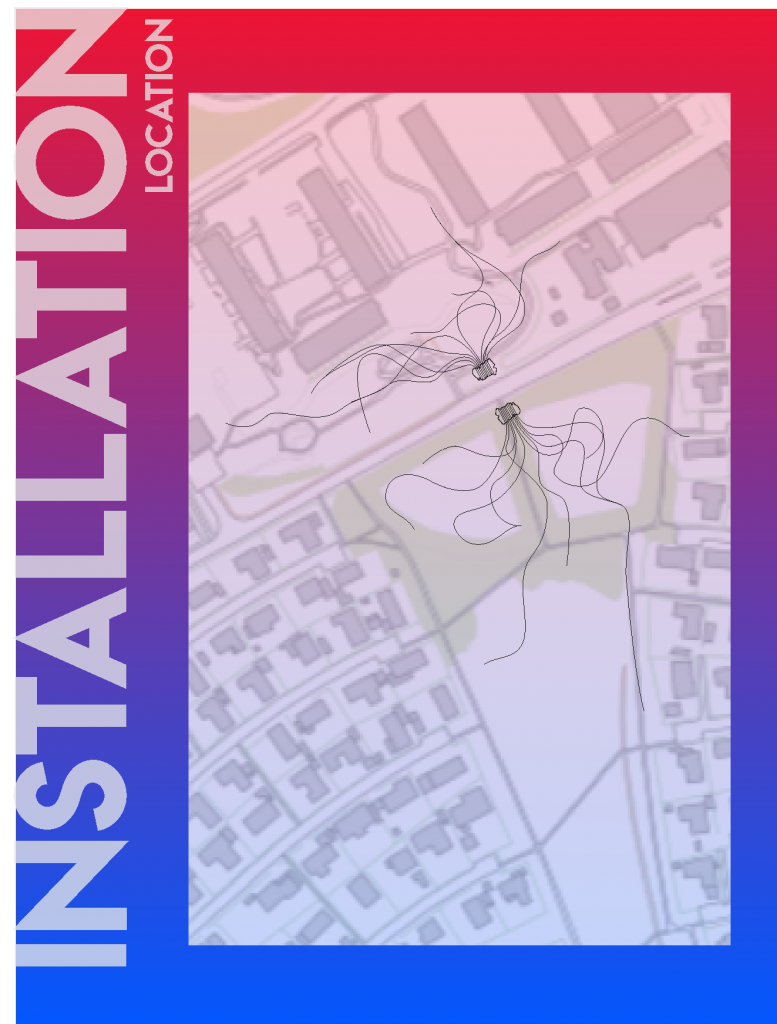 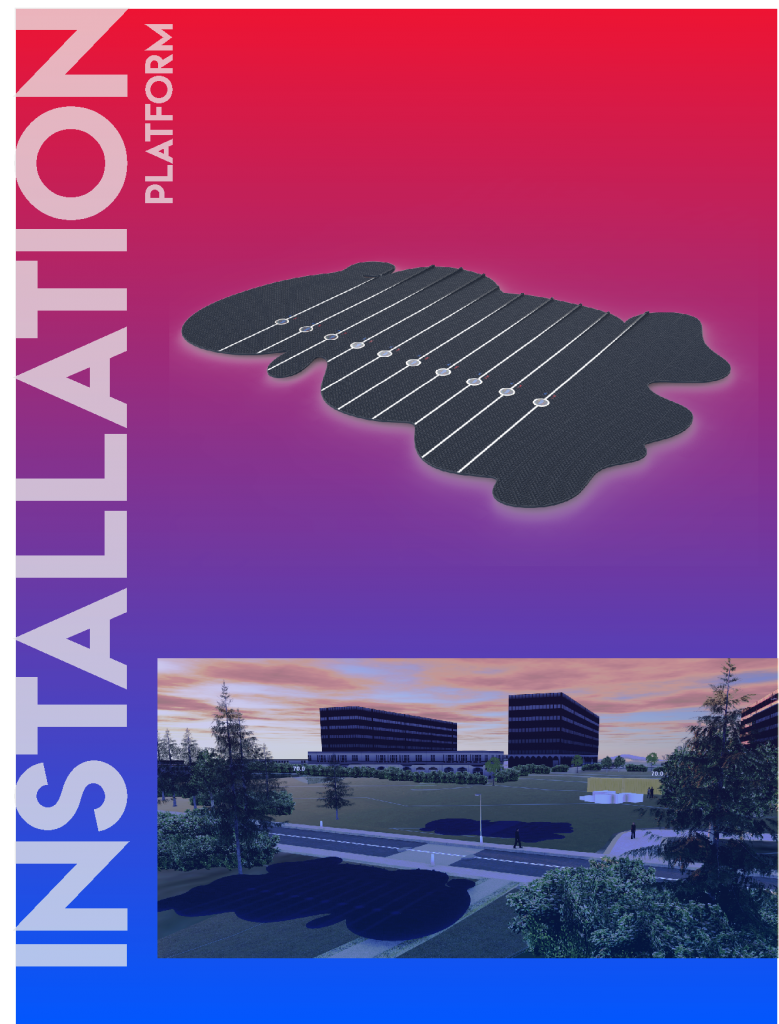 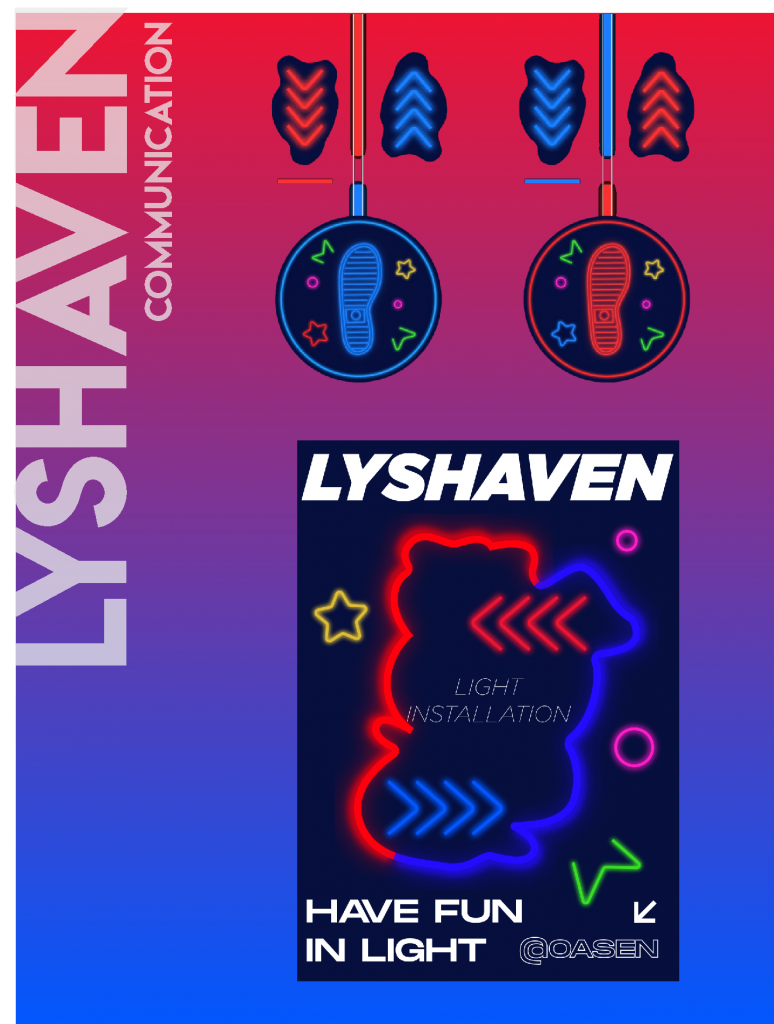 LYSHAVEN is a community project. It is based on broad research with stakeholders and users. The main principle of the project is a co-creation approach between designers and all stakeholders.

WHAT WE DID:
+ Engaging with space, understanding the issue: Interviews with pedagogues, Interviews with neighbourhood’s residents.
+ Engaging with the children: 1. workshops about their identity and interests. – 2. workshop with different games to collect insights about their
motivation and reactions to different type of activities. – 3. workshops about materials and textures. – 4. workshops with light interaction to
discover the level of engagement with the children.
+ Co-creation methods (Engaging, Interviews, Workshops, probing)

LYSHAVEN is an interactive light installation. Consisting of LED-Stripes, that are inserted in the ground throughout the neighbourhoods, it constantly provides white urban light and safety in the usually dark area.
Through its long extremities, the light installation connects different spots in the neighbourhood, that are up to 600 m away from each other. Leading all in one direction, the light guides the curious pedestrian to its destination. At the big street that used to separate the neighbourhood, lights from both sides merge together. The LED-Stripes constantly imitate a movement of water towards the street. Inspired by the idea of an oasis, water brings back vitality to Bispehaven. In the bigger picture of a bird’s eye view, this installation spreads out to the different spots in the area, all connecting in the one site and there connect the two sides of the road. The light installation as a poetic intervention in the urban space of these opposed neighbourhoods starts the first conversation. The name “LYSHAVEN” is referring to the name of the neighbourhood Bispehaven. Turning it into “Lyshaven” makes it a “garden of light”, symbolizing the growth and peaceful coexistence of the diverse communities in Bispehaven.
To increase communication between both sides and support diversity, children play a major role. To integrate them, two platforms on the two sides of the road serve as an interactive playground. Starting a game with an opponent on the other side of the street, they can intuitively get engaged in a competitive or cooperative game with each other. Person A, stepping on one of the buttons, sends light to the opponent B. If B misses to return it, the whole LED-stripe will light up in the colour of person A – throughout both entire neighbourhoods. B can play again and send his light to A – the person who wins (if the other person missed to return it) changes the entire LED-Stripe into one of the two colours – red or blue.
People of all ages, but especially children get invited to interact with the installation to create the appearance of their neighbourhood and explore other areas connected to their neighbourhood by following the lights. By getting engaged in interacting with the installation itself, but also with new kids from other backgrounds the light installation can spark conversations, connections and inspire a voluntary, safe coexistence on a first common ground.

Overview of the issue and the approach: Our vision is a physical and social interaction between the two neighbourhood areas to support both communities' trustful connection. To break down prejudices and assumptions, we want to enable a common ground for social exchange. Having children of both neighbourhoods act as curious ambassadors will make them interact playfully as a first step to engage with each other. The big street between the neighbourhoods, now acting as an infrastructural obstacle and a metaphorical border between the two communities will be the site for the installation.
So how might we create a playful activity that engages both communities by connecting the two sides of the road?
In a co-creation process, we involved mainly children of the neighbourhoods in the project: as the main future users', kids played the most important role in our research. In several workshops, we explored their interests, abilities and preferences concerning a suitable activity and the outcome's design. Parallels and patterns in the preferences of children from both social backgrounds are the base of the creation.
Semi-structured Interviews and Cultural Probes from pedagogues and parents of both areas substantiated our strategy – positive feedback from professional designers and professional pedagogues from Bispehaven finally proved the concept.
The essence of the solution: LYSHAVEN is a light playground and urban lightning for Bispehaven to visually connects communities. It's the means that initiates a first safe interaction between diverse social backgrounds.
The stakeholders in the project: Stakeholders of the project are mainly children from the neighbourhood Bispehaven and from the neighbourhood Abyhoj as co-creation partners and future users. Pedagogues and educators of several youth clubs in the area act as professionals, ensuring the pedagogical quality of the project for the children and the neighborhood. Organisation and communication are supported by the management of the youth clubs. The municipality of Aarhus supports the conceptualisation of the project financially.
Documents:

We are an international team currently studying at Design School Kolding, for the Master "Design for People". We have different backgrounds and disciplines: Yingzi Ni and Runa Rossau are specialized in communication design. Linda Domke, Alice Mingotti and Fiorenza Scarpa are in the discipline of industrial design.