The project deals with the problem of designing cities in the context of the post-industrial society, emerging technologies, and ever increasing interconnectedness of the world. The combination of reducing our systems to apathetic service providers, and the growing consolidation of capital and power creates conditions for an undemocratic, non-participative, fragile society, which is not rooted in its locality and is not flexible or resilient enough to deal with major crises and problems. In such a context, it is important to redefine not only the solutions for the urban life, but also the way in which we reach these solutions. Therefore, this projects deals with the issue of reinventing the methodology by which we design cities, create solutions, how they are implemented and who participates in the process. 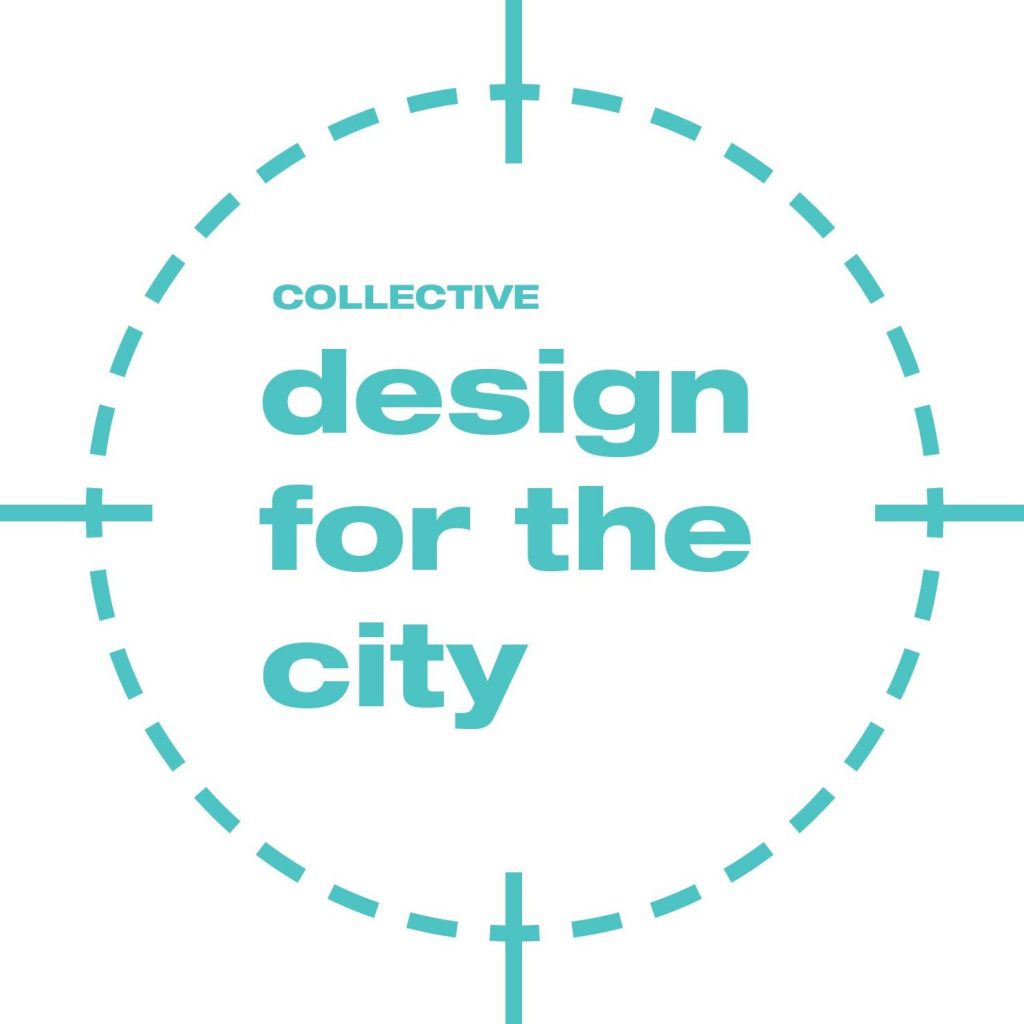 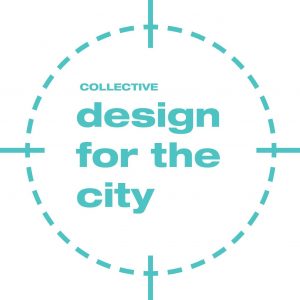 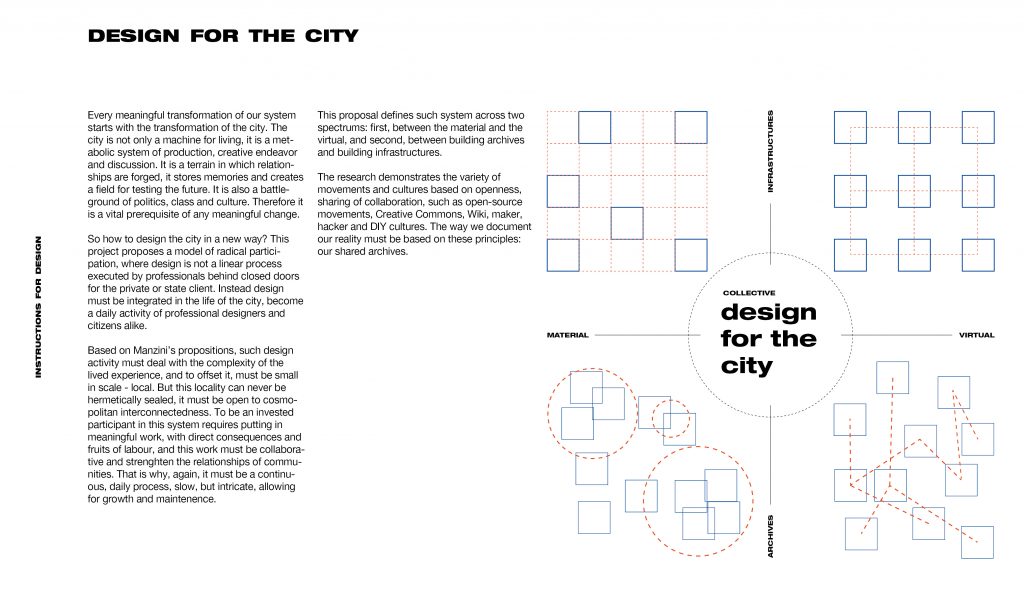 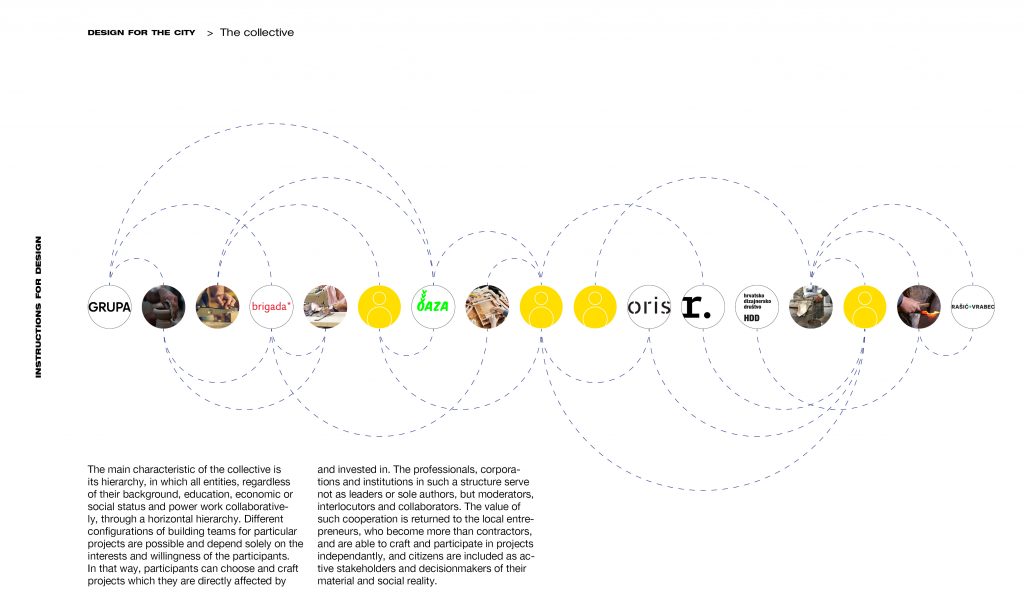 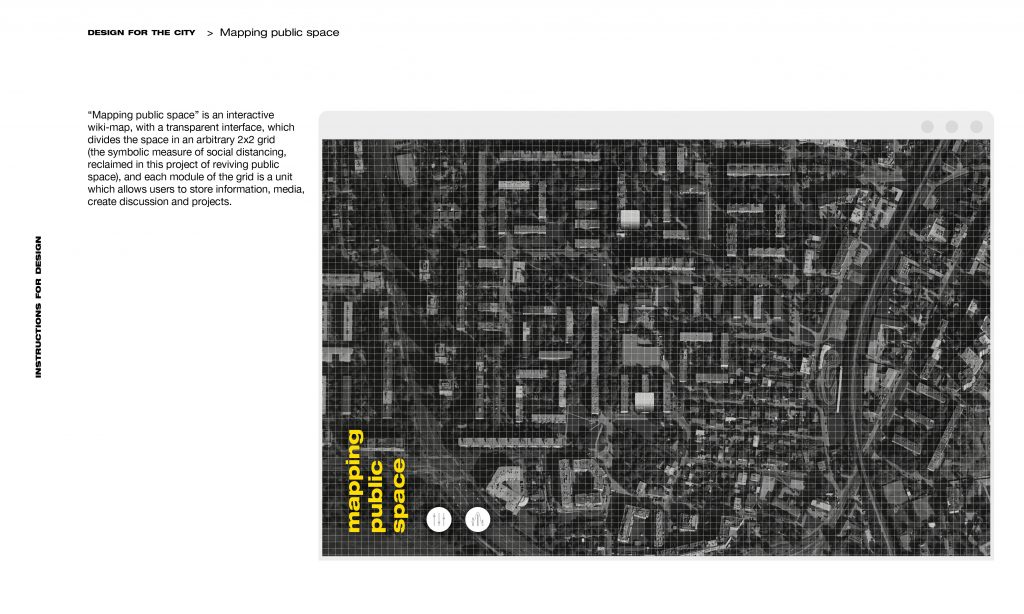 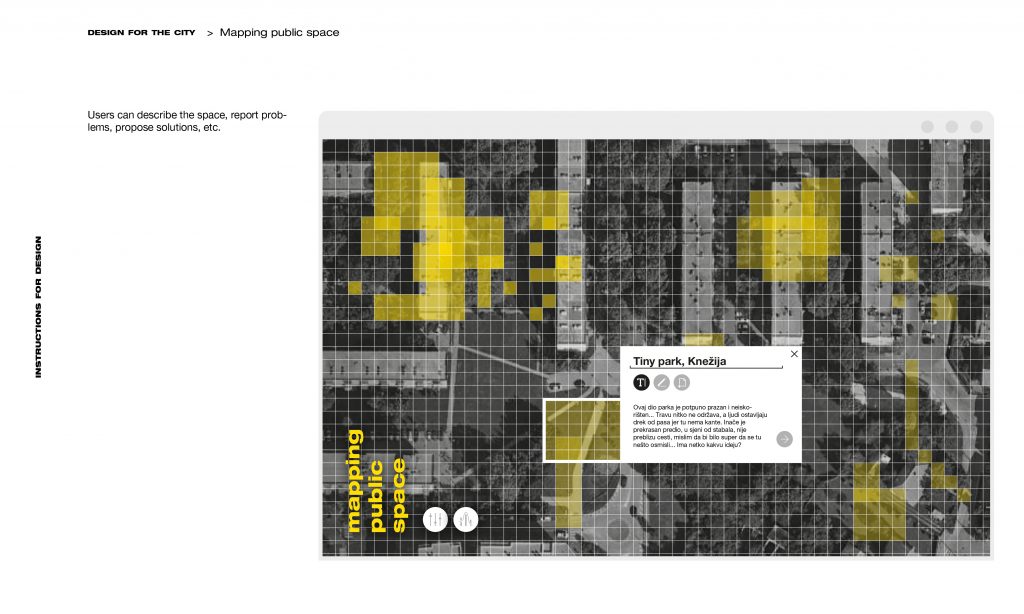 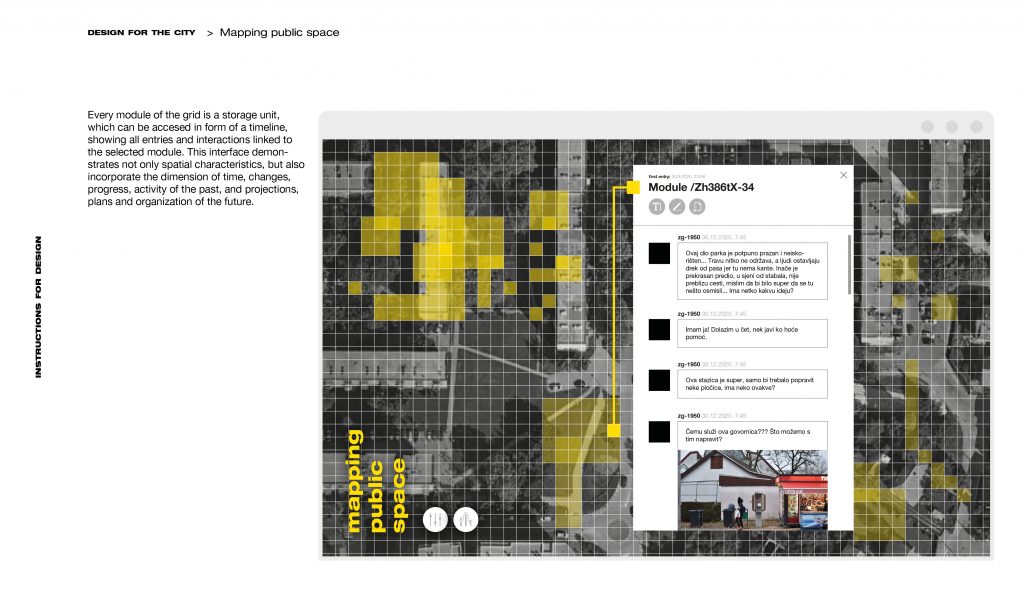 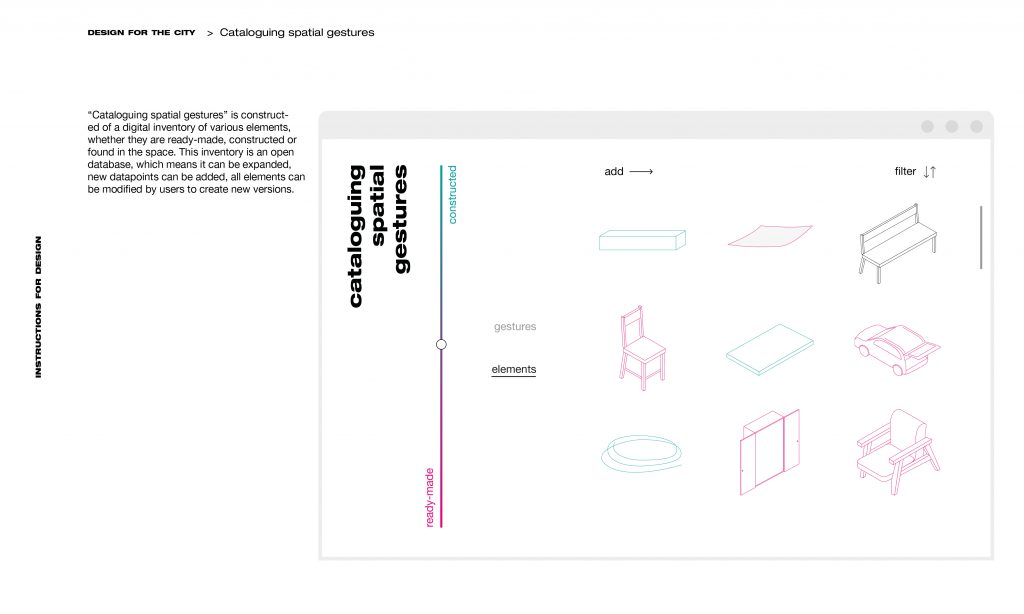 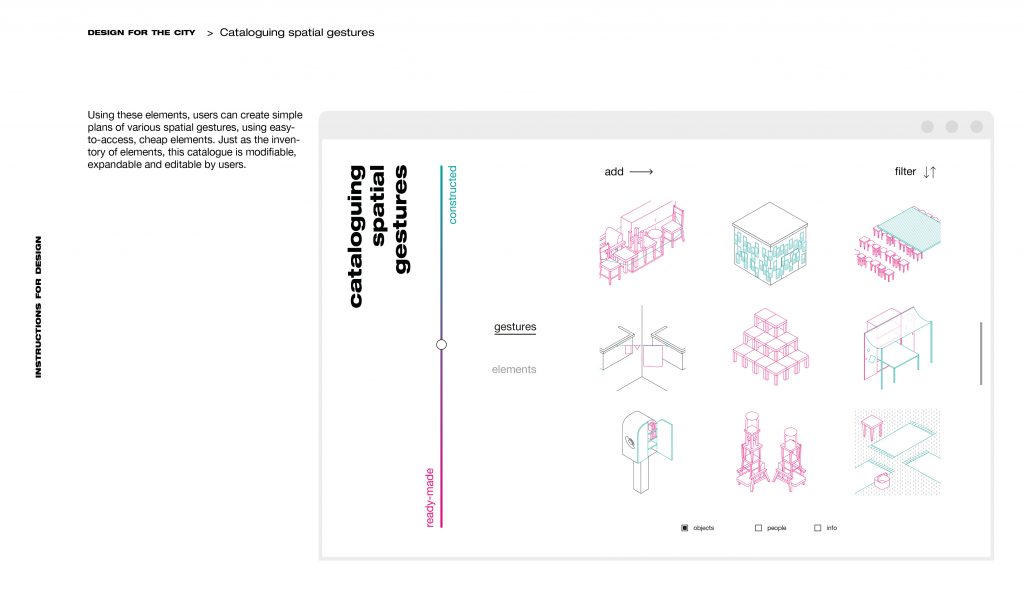 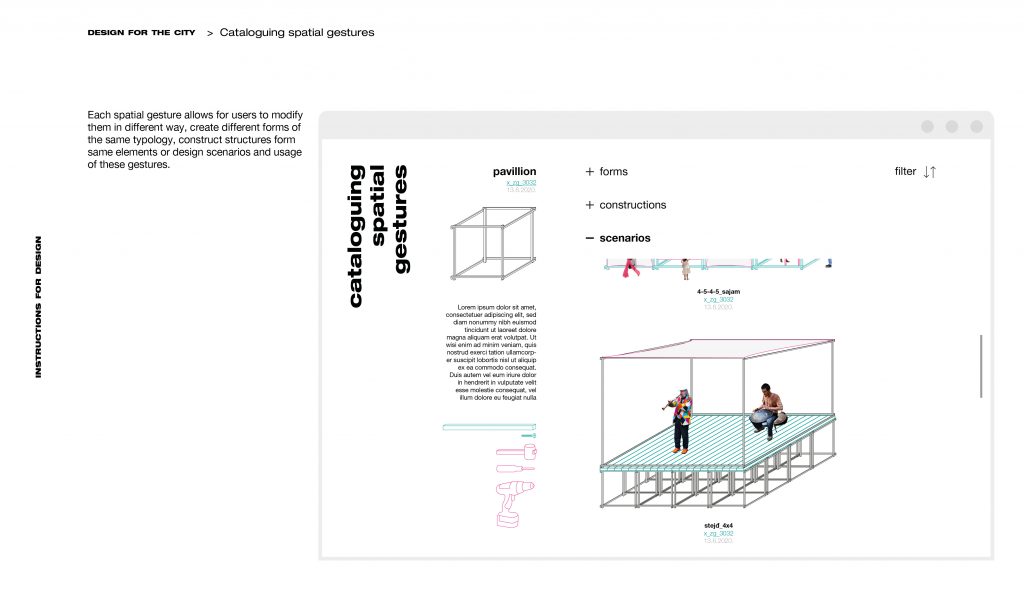 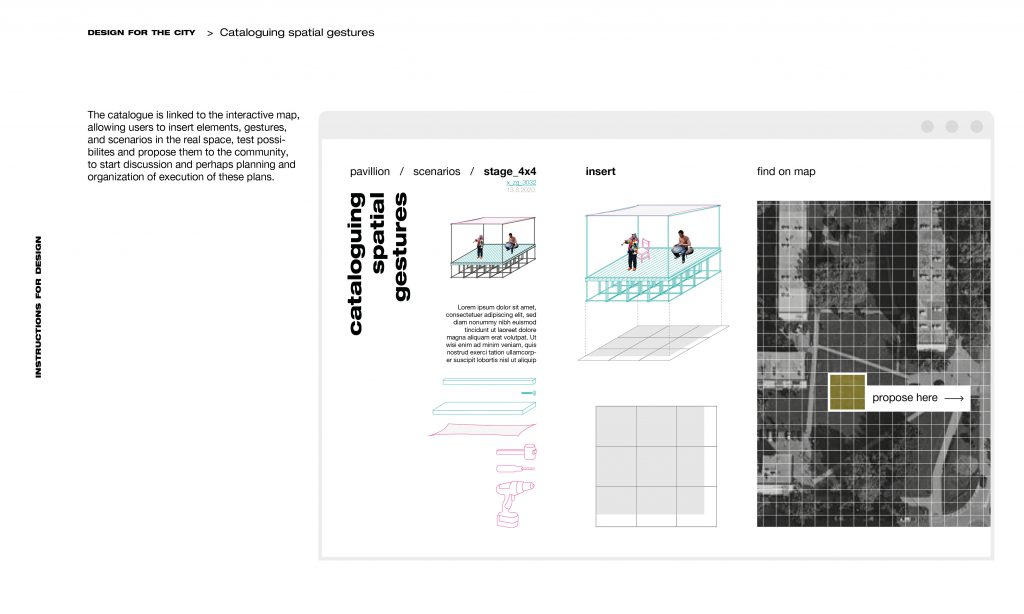 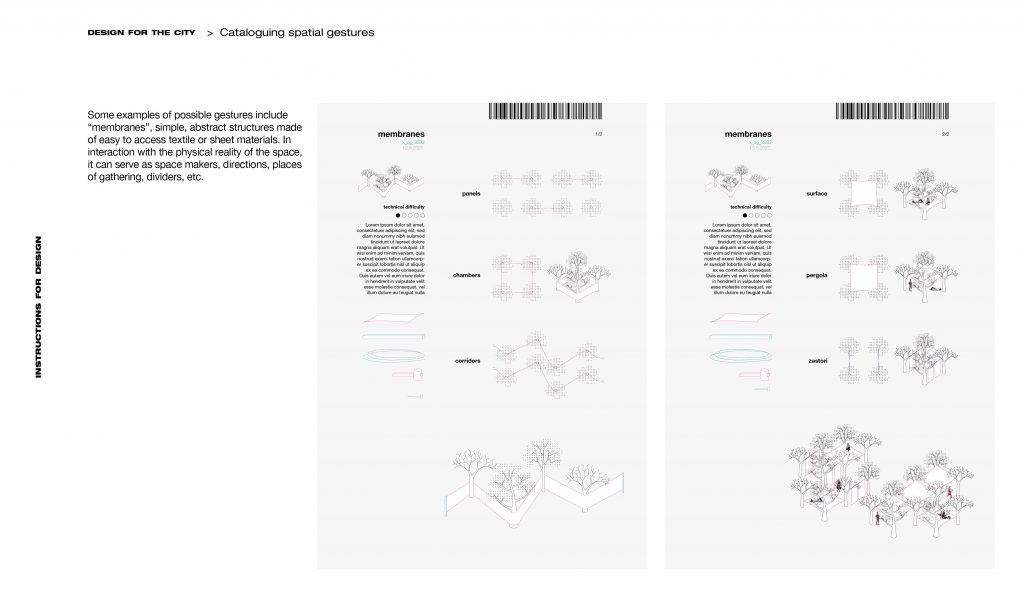 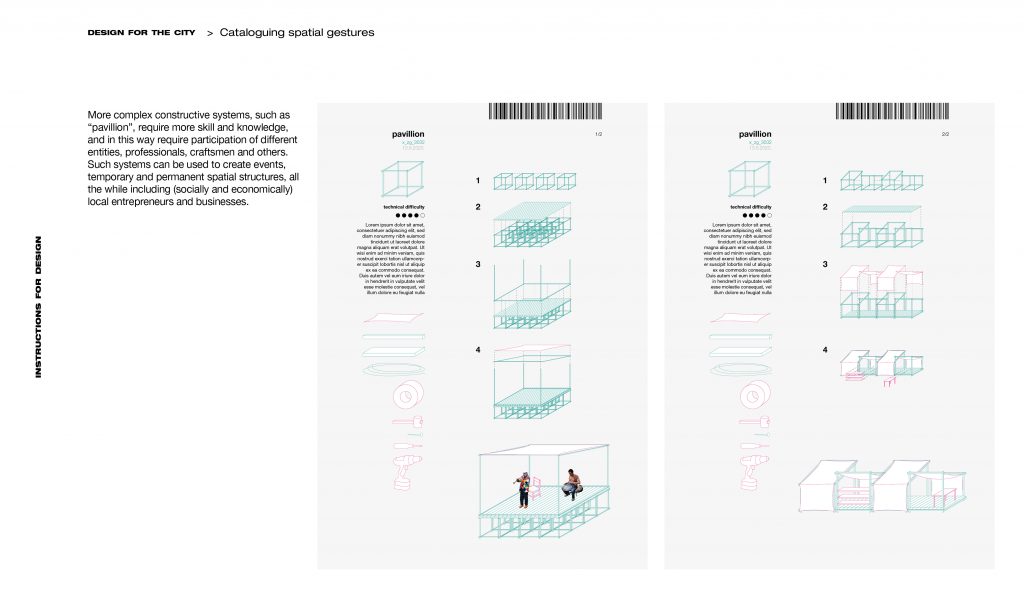 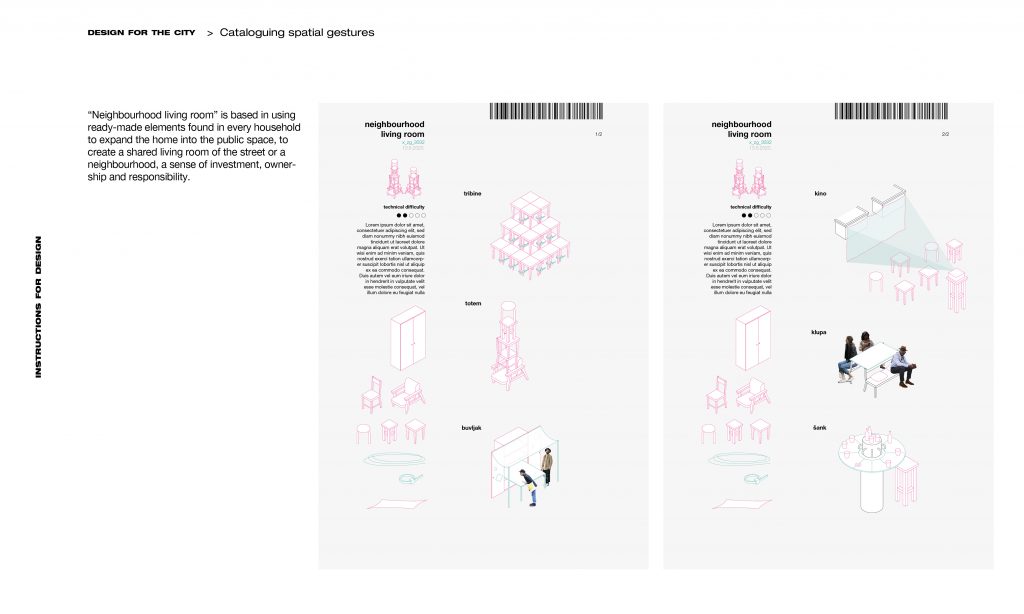 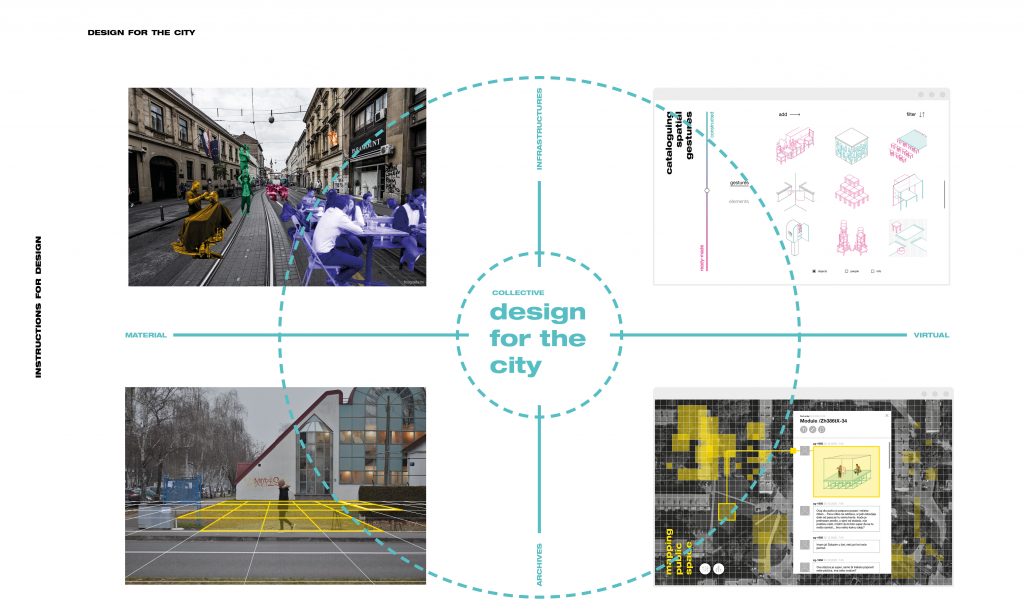 Every meaningful transformation of our system starts with the transformation of the city. The city is not only a machine for living, it is a metabolic system of production, creative endeavor and discussion. It is a terrain in which relationships are forged, it stores memories and creates a field for testing the future. It is also a battleground of politics, class and culture. Therefore it is a vital prerequisite of any meaningful change.
So how to design the city in a new way? This project proposes a model of radical participation, where design is not a linear process executed by professionals behind closed doors for the private or state client. Instead design must be integrated in the life of the city, become a daily activity of professional designers and citizens alike.

The crux of the new conception of designing cities lies in the collective of creative professionals (freelancers, companies and organizations) who engage with the problems of the city and public space, local merchants and craftsmen and interested citizens. “Design for the city” is a democratic and inclusive infrastructure in which all three entities cooperate, share resources, knowledge, skills and perspectives to create solutions and methodologies of designing sustainable city of human scale.

The other basis of the new methodology resides in the virtual world. As the recent events demonstrate, new communication technologies create endless opportunities to connect, organize, collaborate and share, in solidarity and in crisis. This principle can be applied to defining and problem solving in the everyday life. “Mapping public space” is an interactive wiki-map, with a transparent interface, which allows users to store information, media, create discussion and projects.

The second part of the virtual platform, “Cataloguing spatial gestures”, is based on the same principles, open-source, crowdsourcing, collaborative, but it concerns the imaginarium of spatial possibilites. It is designed in a way to be endlessly modifiable digital inventory of spatial gestures, which is accesible to all users, as well as inspiring and a call to action.

For this system to be viable, all components of the system must be integrated and interconnected, and not seen as supplements or substitutes of each other. The virtual platforms for mapping and ideating space aren’t there just to record activity, they serve as imaginaries of the possible, transparent, easily accessible and inviting. It is the work of the collective to transform this activity, coordinate it and bring it to fruition in the real world. Materialization of this activity marks the public space as our own, belonging to the community, which is invested in it, has stake in it and is willing to discuss it and take action to transform it and reclaim it.

Overview of the issue and the approach: The rise and exponential development of information technologies led to an ever increasing array of technological products, services and infrastructures which purport to solve our personal and societal problems. These solutions are based on complex, algorithmic infrastructures whose only goal is to maximize efficiency - to create maximum profit for the stakeholders. Many digital solutions, which are now part of our daily urban life, are subject to this process of Uberization. These interconnected systems have infrastructures which are completely incomprehensible and inaccessible to the user, and present to the user only as a simple, user-friendly interface. The infrastructures and the interfaces are global and universal, regardless of context, and create an impenetrable barrier between the user and the substance of these systems. While these systems maximize efficiency and garnering of capital, using big data - for example a ride-share, taxi app - they create little to no value to the localities in which they operate. They are not invested in these localities, have no stake, interest or responsability to them. The same goes for the users of these systems. To redefine these relationships and create a new methodology of designing cities, this projects consists of extensive research, exploring the nature of the city, the way we design our systems, and what are the prerequisites for this new system. The research also documents the city, in general and in particular, exploring the effects of recent crises on city life, including a case study of the city of Zagreb, the material and virtual dimension of the interactions and activity of citizens with the city. Based upon the conclusions of the research, the solution is based in a redefined methodological approach to design, exploiting the possibilities of information technologies, but being rooted primarily in social innovation, creating a new organizational, material and virtual infrastructure for democratic design.
The essence of the solution: A design collective of professionals, craftsmen and citizens, a virtual, crowdsourced platform for mapping the city and ideating solutions, and a programme of participative activity in public spaces.
The stakeholders in the project: The stakeholders of the project include all participants of the "Design for the city" collective, which consists of creative professionals, local entrepreneurs (tradesmen and crafsmen) and citizens. Professionals (freelancers, companies, organizations) get to co-create projects in the public space, local entrepreneurs are activated and compensated, supporting their business, and citizens are included as equal participants who are given a voice and a possibility to affect change.
Documents:

Leonard Borovičkić is a recent graduate of the MA course at School of Design in Zagreb. In his work, he is focused on design research and exploring possibilites of the design methodologies, investigating cities and applying design to transform urban life. Leonard participated in several group exhibitions, design workshops and interdisciplinary projects and holds several awards, including Zagreb University's Rector's Award, Faculty of Architecture Dean's Award and School of Design Annual Awards.