Several issues are concentrated in this Project from social to environmental global challenges as well as the utilization of innovatives technologies. The main goal is to eliminate slums in cities by transforming them from a poverty generated social (disease, drugs, criminality, unemployment etc ) and environmental challenge as well (urban blight, degradation, lack of services , contaminated and polluted área etc) to an advanced neighbourhood that can generate jobs and wealth for its population and that can be self sufficient since will be financed by a real estate operation in a symbiotic relationship between the public and private sectors . To develop the Project in the real world we selected the Rocinha slums , the larger favela in Rio de Janeiro to allow to insert the Project and its proposals in a real context affecting the área and population of a major city and presenting it to local authorities and entrepreneurs for its potential implementation 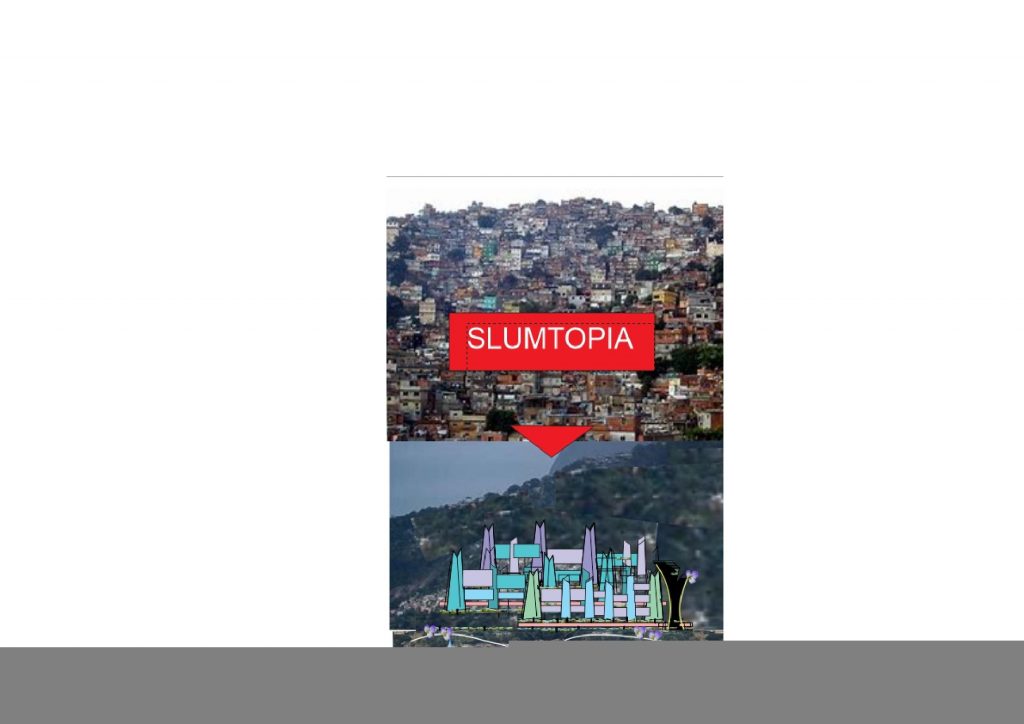 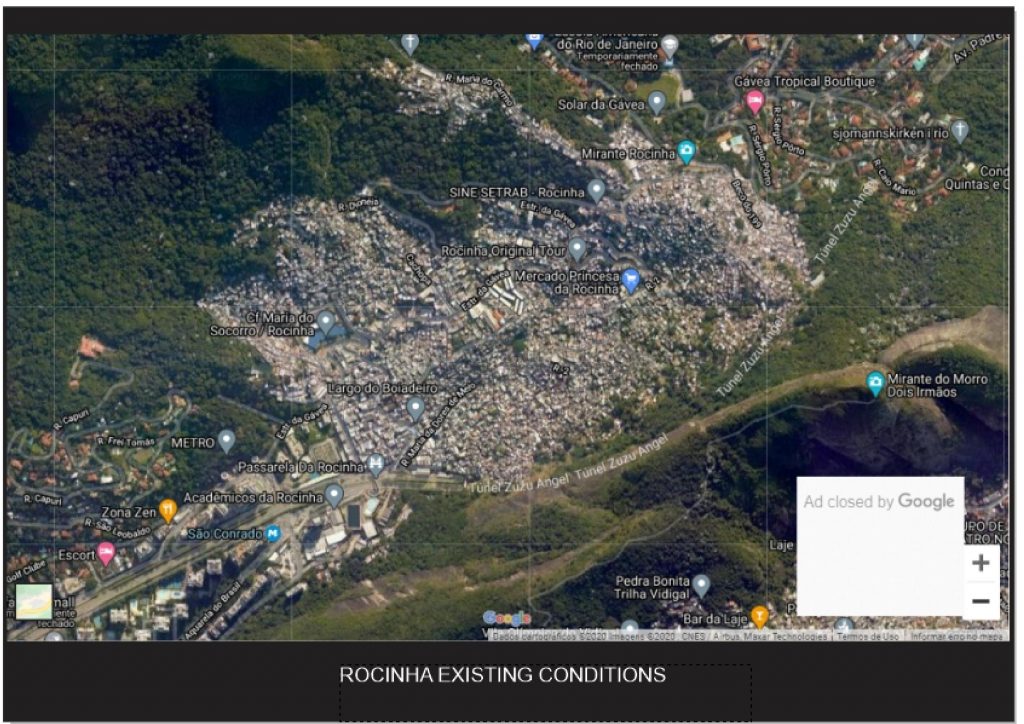 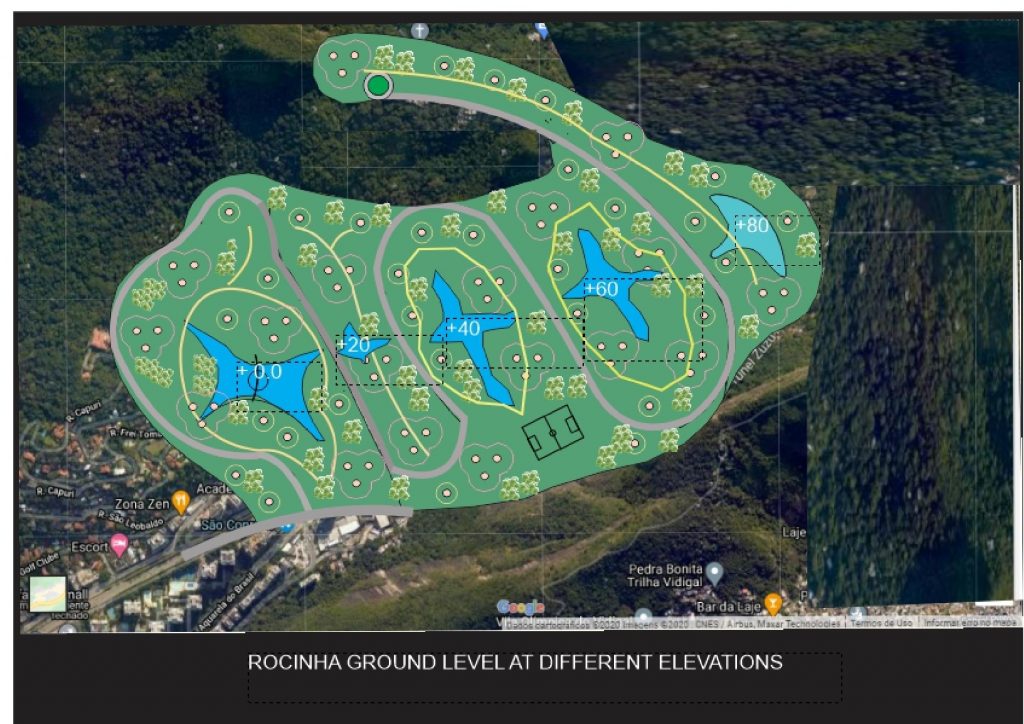 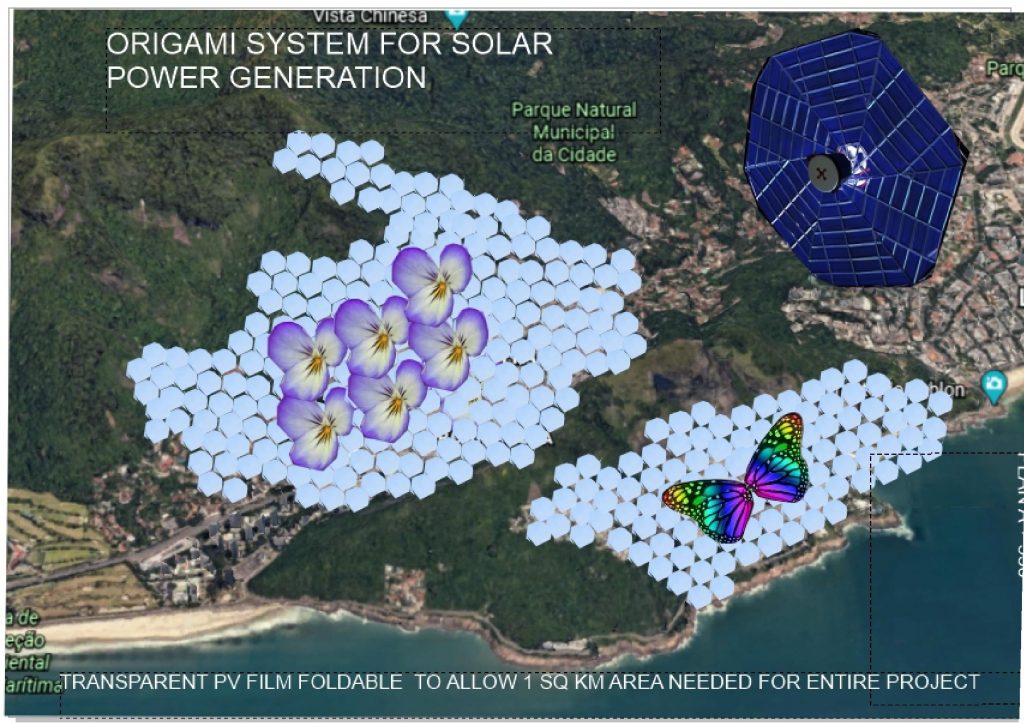 The Project consist in the elimination and reconstruction of two favelas connected in Rio de Janeiro Rocinha and Vidigal for a total of nearly 200K people including the creation of permanent Jobs for its residents. The proposal includes all new approaches, technologies and concepts for its implementation. This project, while dealing with existing challenges introduces several new concepts and innovations that makes it different from conventional approaches.
.-From the environmental point of view such challenges and concepts involve city planning and architecture and they are:
1-TECHNOLOGICAL CHALLENGES
-Urban cell City planning basic unit consisting in a self sufficient multifunctional area of approximately 500 to 600 m diameter , with a maximum pedestrian distance between 250 to 300m from a high speed public transportation terminal -3D cities new massive utilization of areas above ground level, multiplying area potential -Metabolic towers unmanned buildings to house waste recycling plants , 3D printing manufacture of recycled materials and food production by vertical hydroponic agriculture to allow 100% solid waste recycling and power generation through organic waste incineration-including sanitary water decontamination and recycling facility . They also include vertical hydroponic plant with vertical multilayered agricultural areas for fruit tree and other type of conventional plantation -Low cost construction system by utilizing recycled plastic wastes to manufacture LEGO like wall, ceiling and floor panels filled by cellulose produced from paper recycling for insulation purposes -Earth Terraforming this concept consist of several methodologies to renovate our planet environmental conditions to pristine ones, eliminating all pollution and its causes such as :
A-Save existing natural land by physically separating natural ecosystem from the artificial one while maintaining their functional integration. This concept means that construction, except for foundations , start at 20 m elevation from ground level B-All green and localized power Transform all power generating local sources to all green and generated by renewable sources (solar, wind,geothermal, underwater currents) Eliminate all power lines and old equipment , substations, transformers etc C-100% waste reutilization by collecting , recycling and reutilizing all solid wastes and incinerating biowastes to generate power utilizing the metabolic towers
2-BUSINESS CHALLENGES
-Feasibility studies, business plans and models must demonstrate that the project will generate the expected profits to encourage private enterprise and banks participation for its realization and be self suficiente from the financial point of view . Due to high numbers involved such profit possibilities must be huge since they must allow to pay for all needed social buildins and services as required for the population and the city. -New money engineering Create virtual wealth by expanding building regulations to finance the intervention with the public and private sector working together in symbiotic mode. Such relationship must allow to pay for the project without public money needed creating a new economic win-win relationship between public and private sector. -Use innovative concepts, materials , products and systems in new project ranging from power generating systems with origami technology to new construction concepts to automatize residential construction using waste recycled materials . Such innovations will spawn new industries and bring further benefits to the community . This is the main difference compared with existing government financed approach to eliminate slums, the cost of the operation, including social themes, is entirely financed by the profits of a real estate type of development.
3- SOCIAL CHALLENGES
The main reason for the formation of slums is not technical but social and antropological Slums generate a new and disrupting counterculture compared to the mainstream one In slums social values are different , a drug dealer is considered an achiever and a role model , he not only makes money but supply jobs for many others. Prostitution and drug dealing is a way of life, the same as robbery or other criminal and illegal activities, police officers are considered enemies.. We must break that type of culture if we want to eliminate slums. By changing their houses , giving them beautiful apartments and services will not change their habits. Too many projects had such goal and at the end, the buildings had to be demolished to stop the rising criminality. For that reason the most difficult challenge is the social one. We must change the slum subculture and introduce a culture where positive values depends on merits and legal achievements , where role models must be different while demonstrating that crime does not pay and never will.
A specific strategy must be implemented to achieve the social goal, eliminate the criminal role models, allow everybody to have a regular job for his living, send children to school and take them out of the roads. Only creating wealth legally , by giving full employment to the population can eliminate such subculture . Such activities are part of the project , together with the city planning and business model in order to achieve our goals An acceptable schedule with minimum disruption to the population. is part of the scope while minimizing total time (12 years divided in four 3-year phases).
4-POLITICAL CHALLENGES
Another important challenge is the political one . since the project heavily involved the authorities and public administration because of the need of their approval for revolutionary projects with very different land use possibilities than the existing . Undoubtely the authorities want and need to get rid of the slums but in order to do it without expense they must help create virtual wealth that can become real by implementing the project by the developers. The total cooperation between the public and private sector is the main condition to achieve the desired goals. That includes not only the real estate operation but the Jobs creating activities with due incentives to the entrepreneurs involved.

Overview of the issue and the approach: The challenges that our society must face fall mainly in two categories : social and environmental. With this proposal we are addressing urban slums and its scope is to find new instruments to eliminate them from the social and environmental point of view creating solutions that could be adopted everywhere. Slums are the result of poverty, main consequence of unemployment. Without the financial capability to support themselves urban dwellers are utilizing public and private property illegally, to build shelters with poor materials, without any planning or permission, whose illegal existence create urban blight and moral decay, promoting criminality such as drug dealing, prostitution, robbery , kidnapping , disease and lack of instruction, breeding a parallel negative society that affect us all. The scope of our proposal is not only to renovate the city and the buildings creating new and pleasant neighbourhoods instead of slums. To eliminate poverty we need to get deeper into the challenge with the most practical way, creating employment and wealth. With the same public/private symbiotic relationship we are proposing local manufacturing activities based on the innovative products that will be used in the project and could also create all new industries .

The essence of the solution: Face global challenges through new disruptive political, social, environmental , financial , city planning and architectural solutions with a real theme and possible global application.
The stakeholders in the project: All interested parties in our Project could be considered as stakeholders. The political authorities , the entrepreneurs, the entire population existing and future . Final scope is not only to change physically the neighbourhood, but mostly eliminate poverty by creating a full employment condition were the entire population could lead a healthy and productive life and have adequate assistance at all ages .
Documents: