In the XXth century, Bogotá experienced rapid population growth and significant industrial and commercial development. These new dynamics stimulated the urban footprint expansion towards what was once the periphery, creating new centralities evermore distant from the historic city center. Consequently, the traditional downtown sector, where the study area is located, went from being a modern business center, to a disused zone with an almost suburban density. Furthermore, during the expansion process, the city lost 95% of its wetlands and, only between 1991 and 2001, Bogotá lost at least half of its green areas, to make way for new urban settlements. Thus, it is worrying to think about the consequences of urban expansion, knowing the city continues to grow, now towards the surrounding municipalities. This poses the challenge of optimizing the city’s capacity to respond to the growing demand for urban facilities, housing and public space, without compromising the scarce permeable soil. 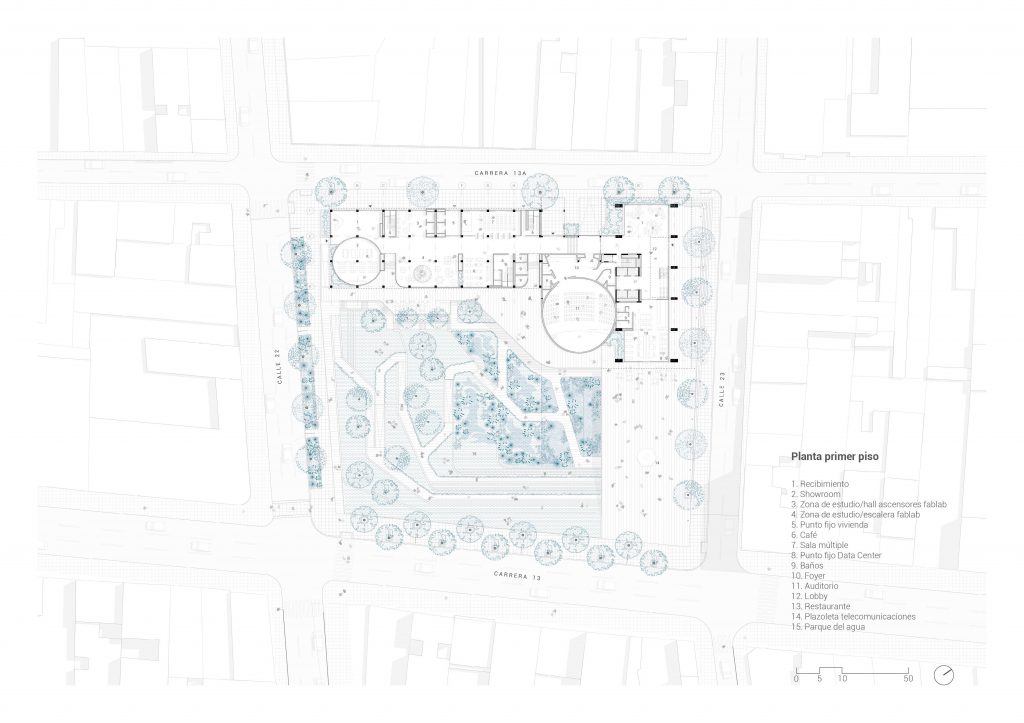 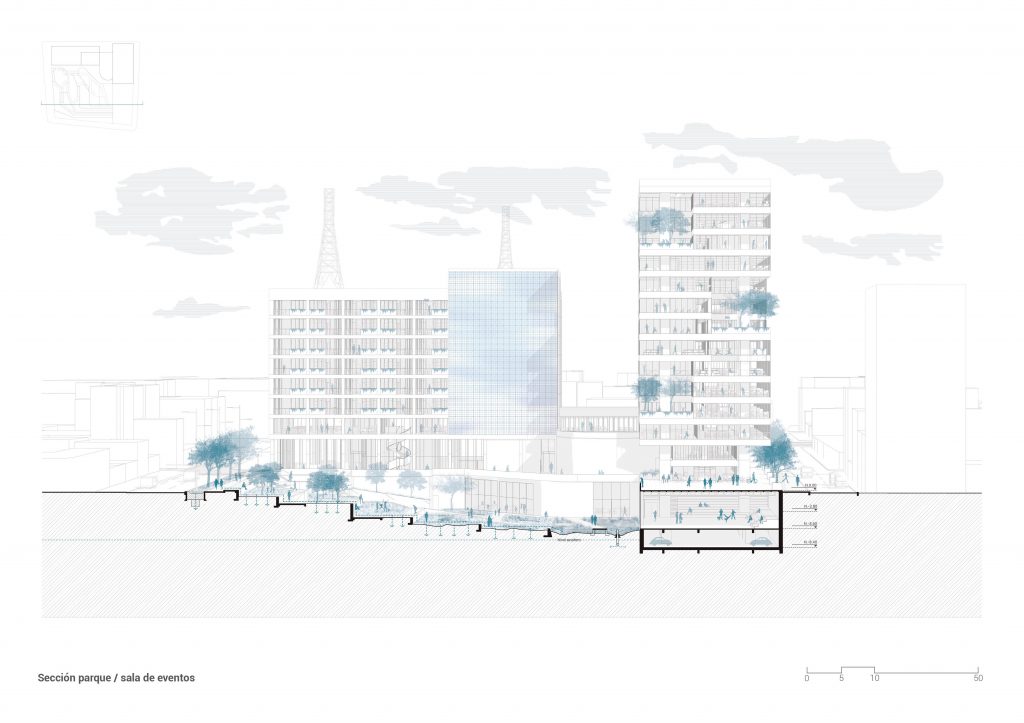 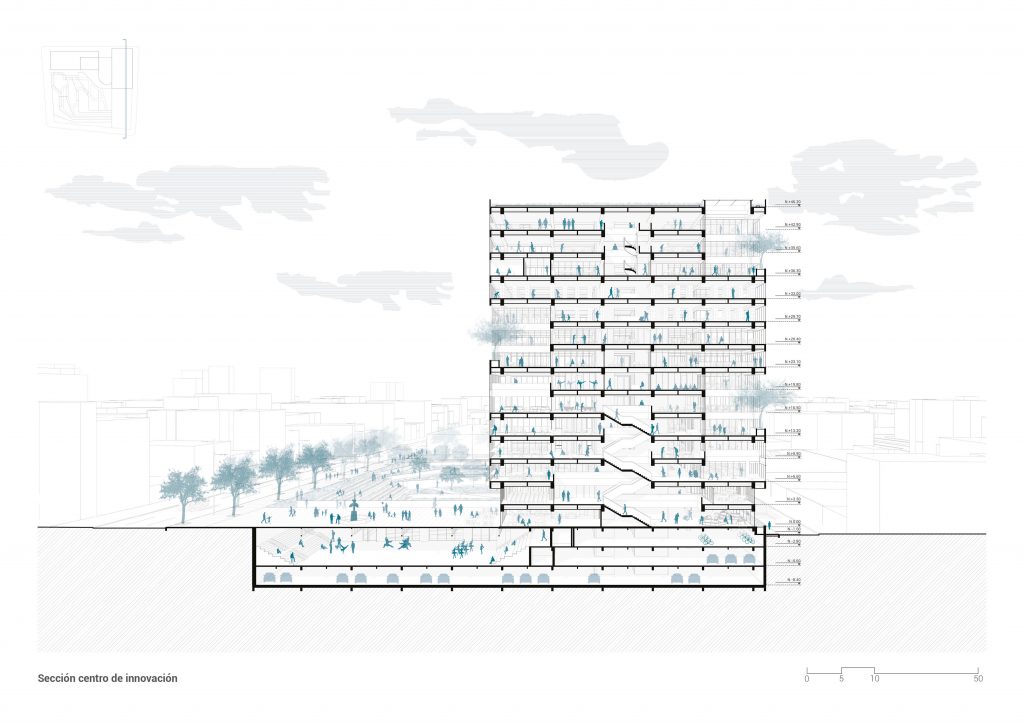 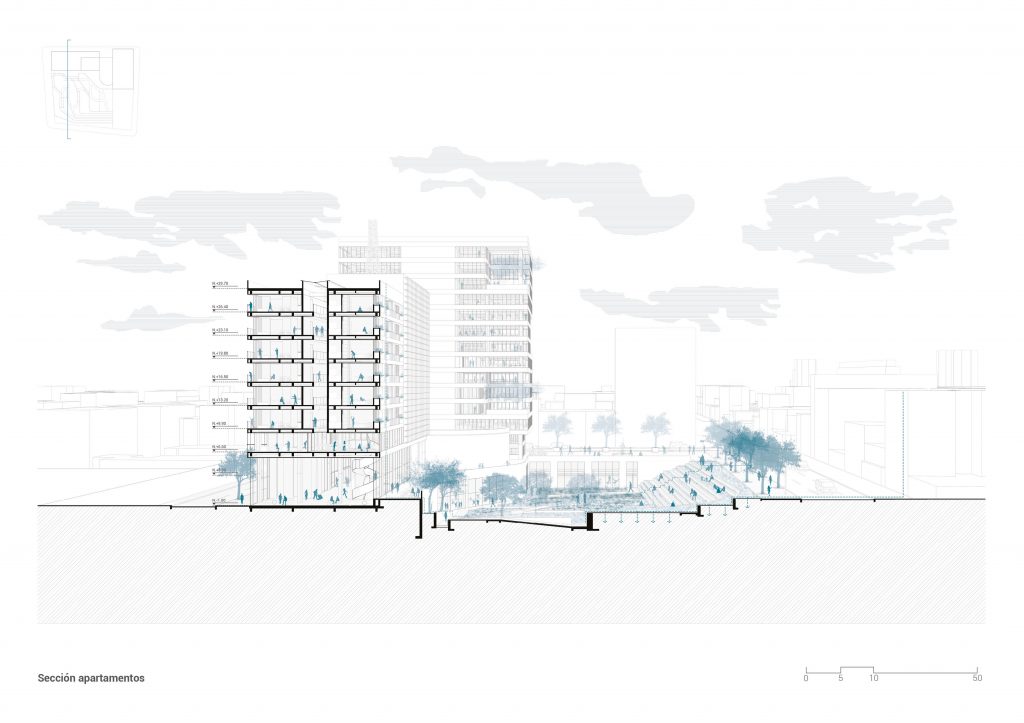 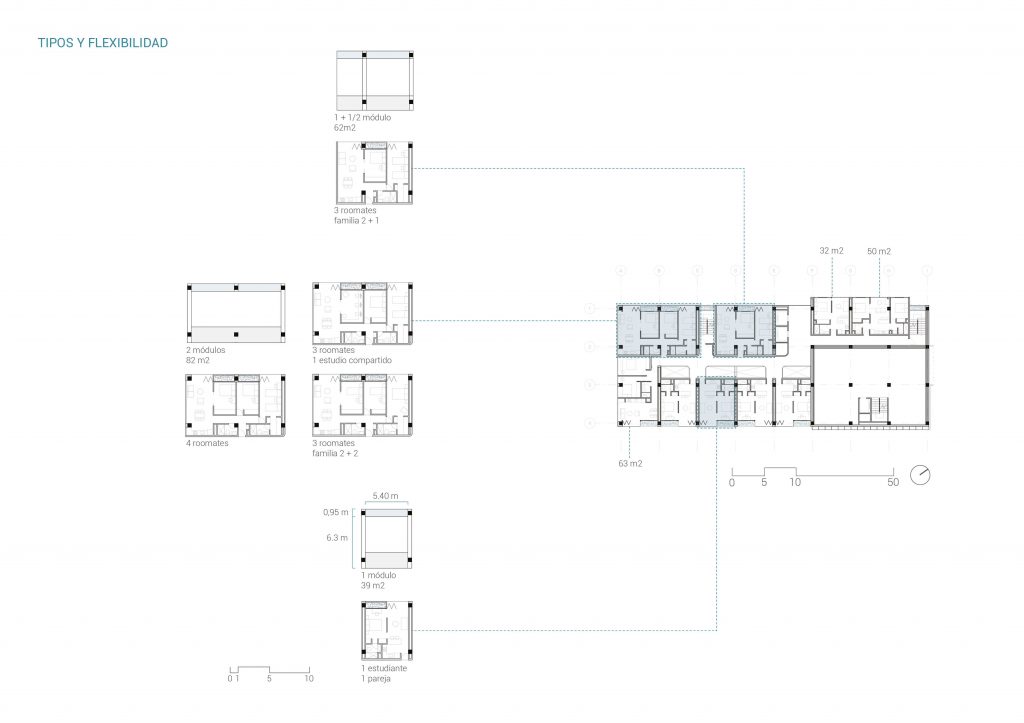 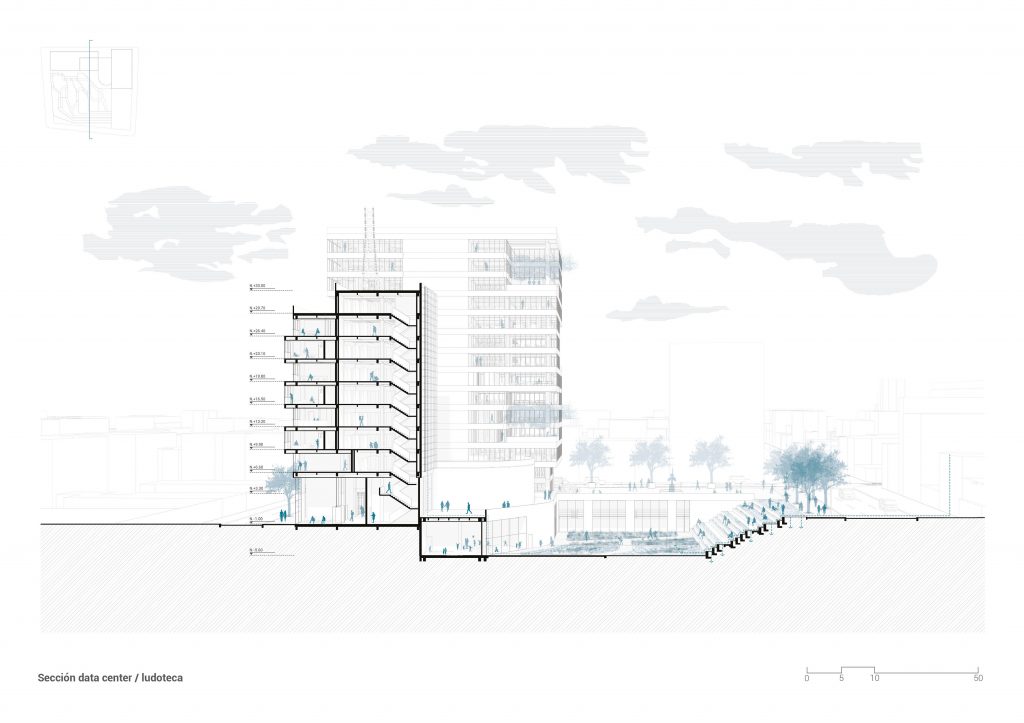 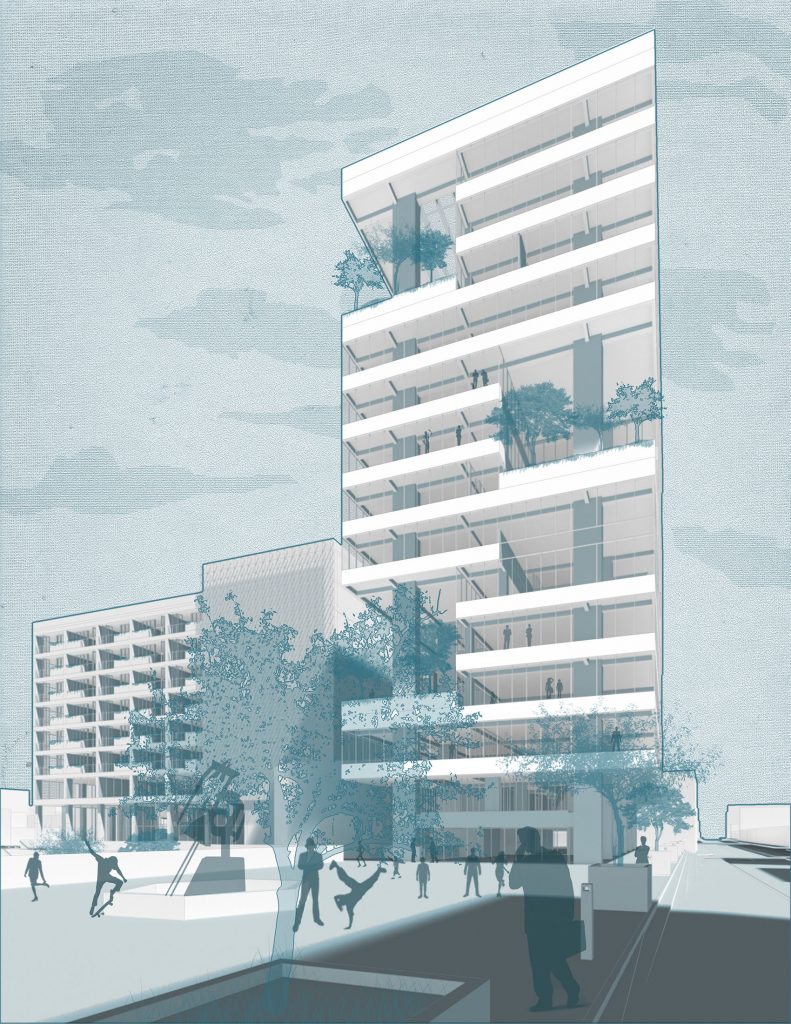 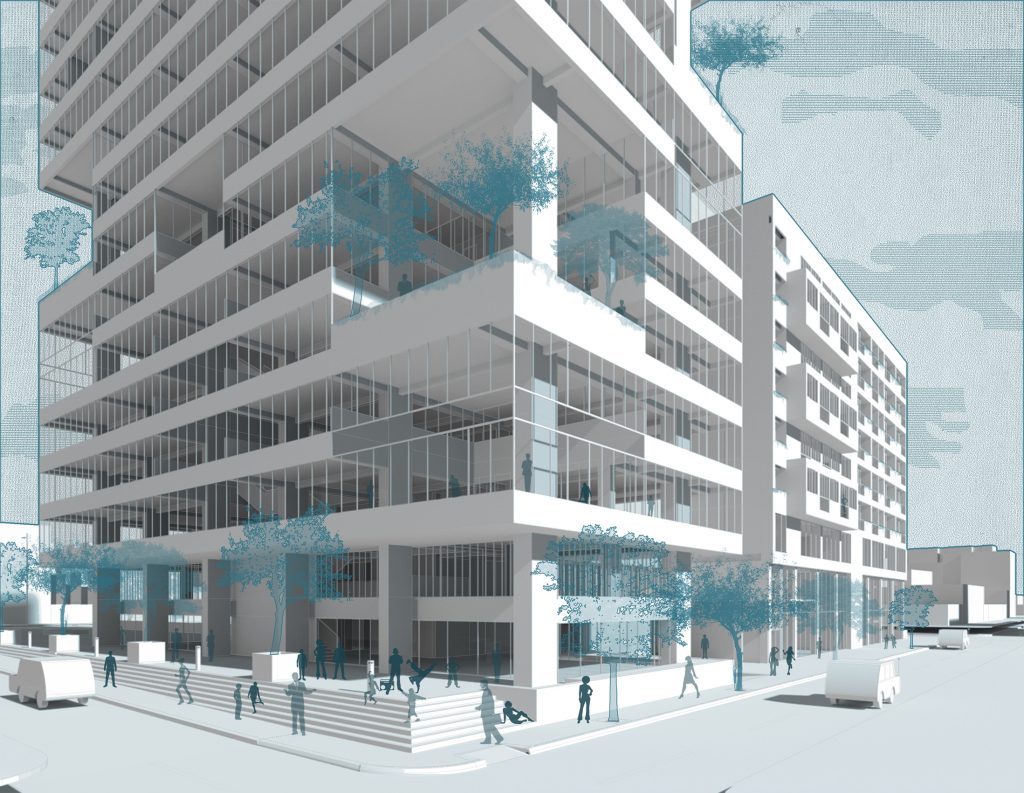 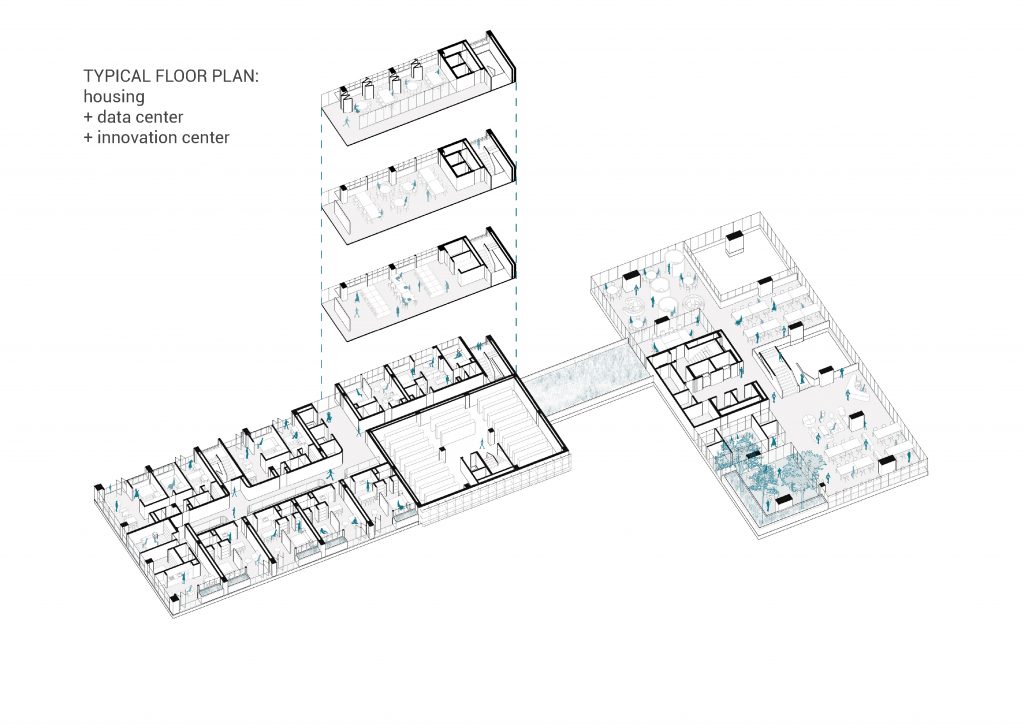 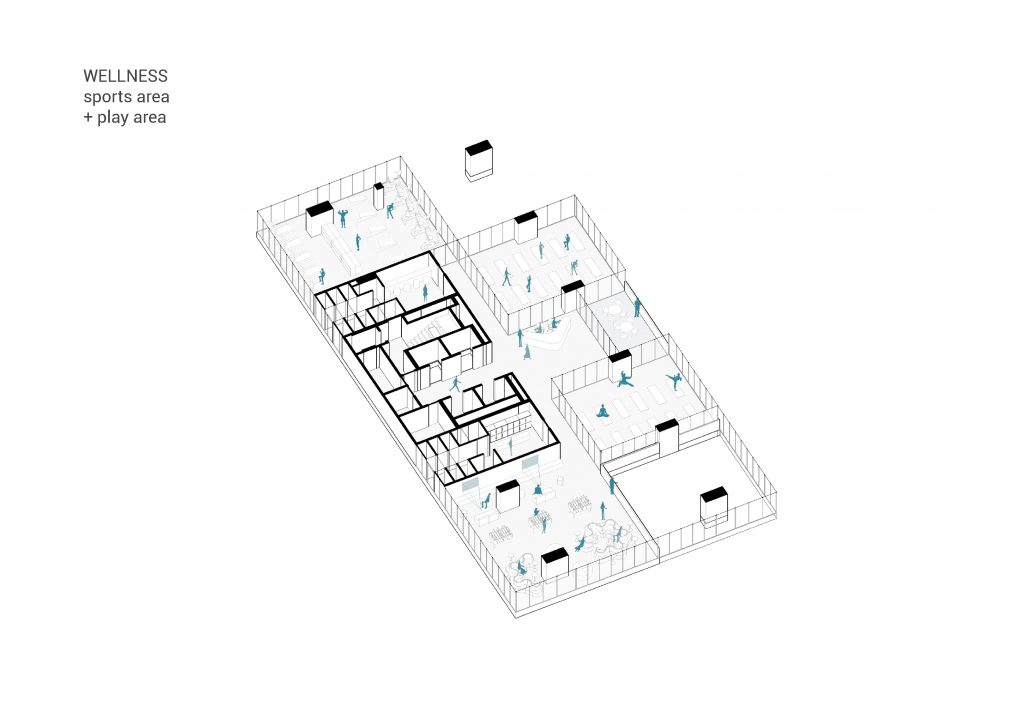 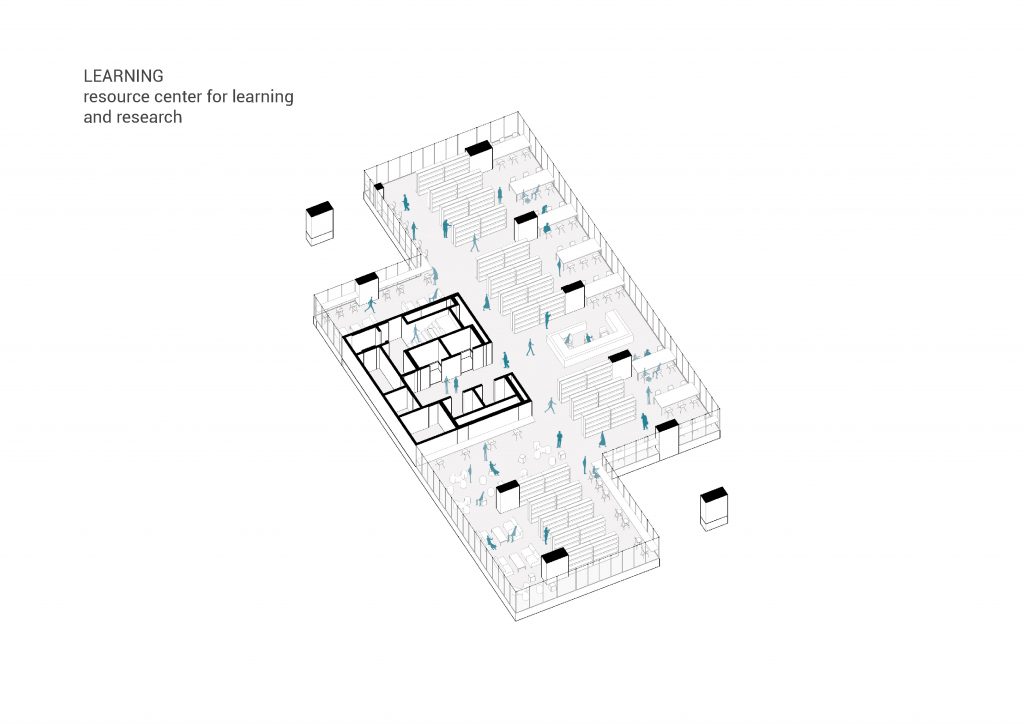 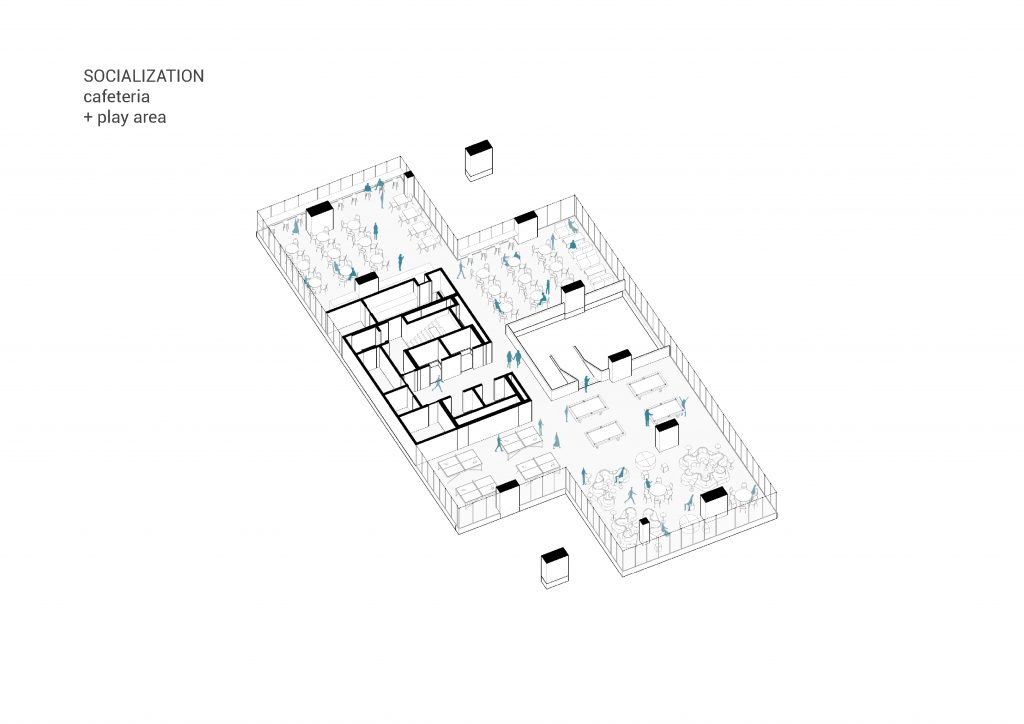 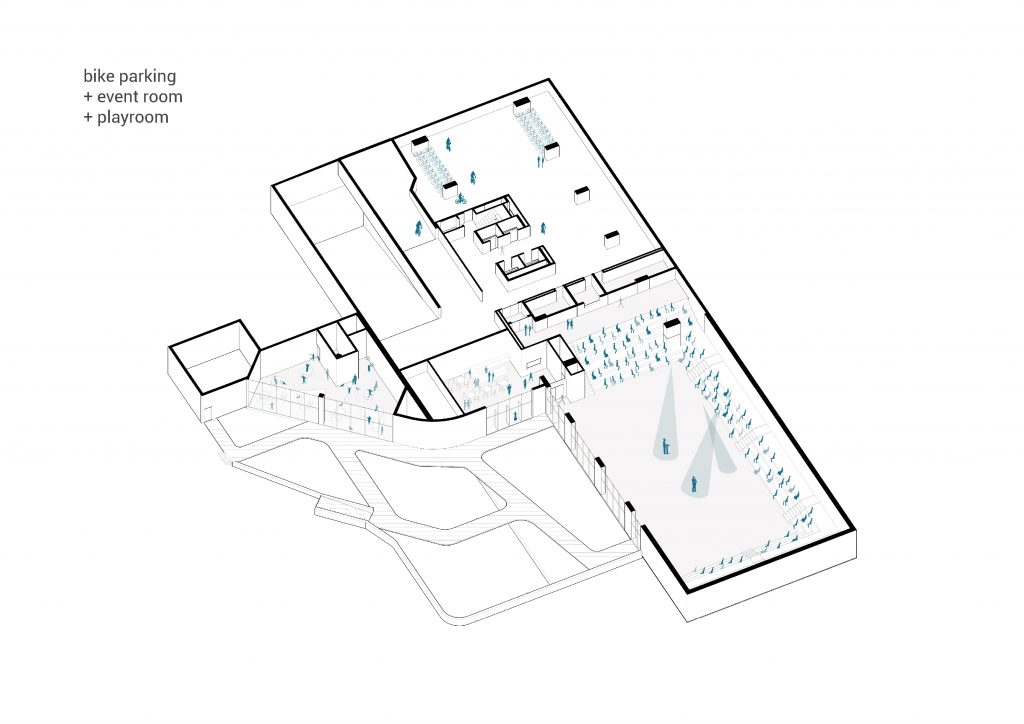 Innovation Laboratory is an urban renovation project which allows experimentation in areas of architecture such as housing, public space and an innovation center in a disused block in the historical center of Bogotá, Colombia. Considering that the block was formerly the headquarters of Telecom (the main telecommunications company in Colombia until its bankruptcy in 2003) and taking into account the creative and investigative potential identified in this area, the project aims to reposition the block as an innovation hub. This is achieved by building a campus for the generation of creative ideas, which is composed of open floor plans and terraces to stimulate interaction, synergy and the development of innovative products; a space to learn, create, share and exhibit knowledge, which improves the competitiveness of the city and propels both its social and economic development.
Sustainability is the backbone of the proposal. Therefore, the intervention is based on three main strategies: first, the conservation and repurposing of existing structures to preserve the area’s identity and minimize the CO2 footprint; second, the creation of flexible work and residential spaces, capable of evolving over time to avoid obsolescence; finally, the regeneration of a green public space where stormwater and wastewater are naturally treated for their reuse within the project, ensuring an ideal integration of the urban and natural environments and providing a space that contributes to the well-being and connection of users, residents and visitors of the project.
Thus, the Innovation Laboratory establishes a sustainable model for interventions in abandoned central areas, that promotes economic development, increases quality of life and positions the environmental aspect as the main axis of urban transformation.

Overview of the issue and the approach: Bogotá’s population has grown rapidly and, according to projections, it will continue to grow, pushing the expansive occupation of the territory: in 2050, Bogotá’s urban footprint will be 1.8 times greater than in 2010. This affects ecosystems, putting at risk the land’s and the citizens’ health. Therefore, in order to attain SDG11 Sustainable Cities and Communities, it is urgent to find a responsible urbanization alternative.
In this context, urban renovation offers to reduce the pressure of growth on the periphery. Indeed, urban renovation does not require the construction of new developments, but instead recovers central areas that have been underused or deteriorated. Based on this treatment and addressing SDG12 Responsible Consumption and Production, the project reduces waste generation through recycling existing structures. This measure minimizes carbon emissions by 892 tons, the amount of CO2 that 500 Colombians would produce in 1 year.
Also, in response to SDG6 Clean Water and Sanitation, the project ensures a sustainable water management by using SuDS and creating a park with a wetland, which, together with the building’s green roofs and terraces, act as an integrated system designed to collect, treat and reuse rain and wastewater. This relates to SDG3 Good Health and Well-Being and SDG15 Life on Land as well, providing natural spaces where clean air is produced while biodiversity is celebrated.
Lastly, the project recognizes the cities are changing at a rate that leaves us almost without the ability to react. This implies the urgent need described in SDG9, to design resilient infrastructure and promote innovation and research. This is why the project is an innovation center; a flexible space to work and live in, to conceptualize the implications of the transformations that challenge us. As intended in SDG8, Innovation Laboratory is a place for creative ideas to thrive and for knowledge to be shared, supporting the local, sustainable economic growth.
The essence of the solution: Innovation Laboratory is an urban renovation project which, based on sustainable practices, experiments with housing, public space and an innovation center in a disused block in Bogotá’s city center.
The stakeholders in the project: There are four groups of stakeholders acting in synergy: first, the government, leading the city’s social and economic development; second, entities of all scales that focus on the environment, such as the Ministry of Environment and Sustainable Development; third, agents of the innovation ecosystem, as the ICT Ministry, education centers and students, entrepreneurs and creative clusters of the sector; last, the users, who bring life to the project, generate ideas and enjoy the public spaces.
YouTube video: Z0IrI6ovdDo
Agreement: Accepted

I am a recent architecture graduate from Bogotá, Colombia. Learning is what motivates me the most. I am passionate about investigation and, specifically, about designing environmentally conscious solutions. I have a deep interest in architecture’s social nature, which inspires me to design pragmatic projects, that are responsible and that contribute to my country’s development. I am a highly ambitious female-architect who strongly believes we can improve urban issues through sustainable design.